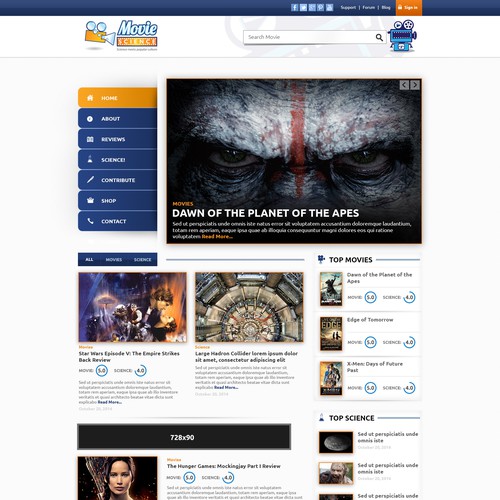 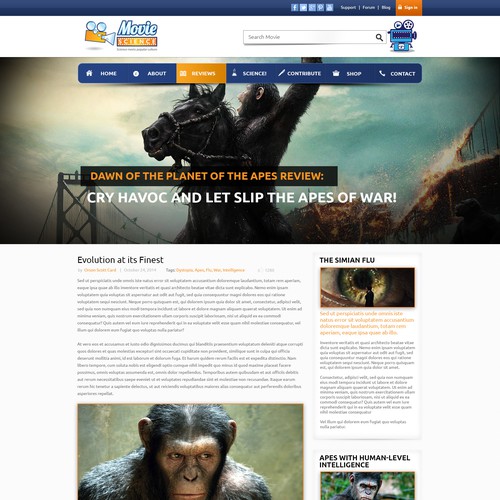 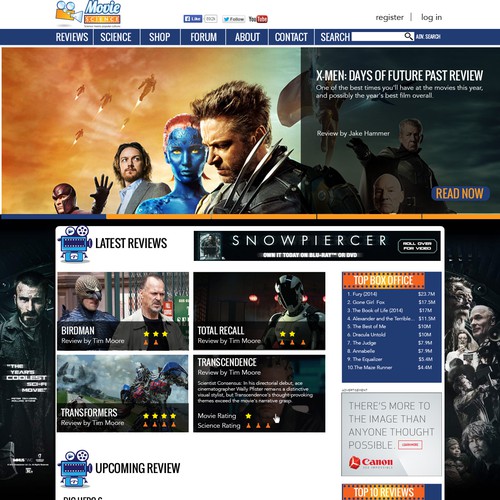 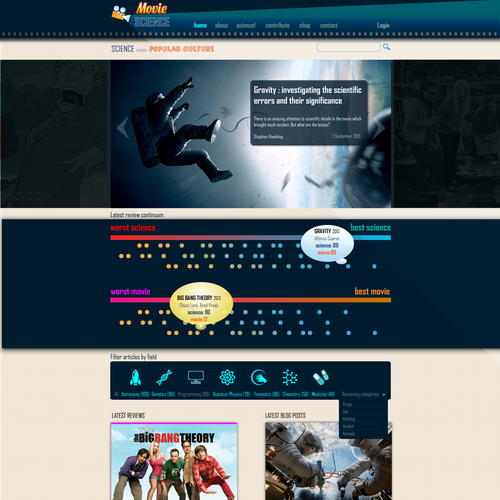 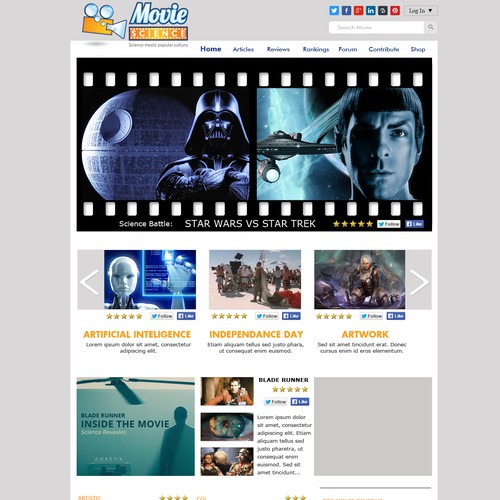 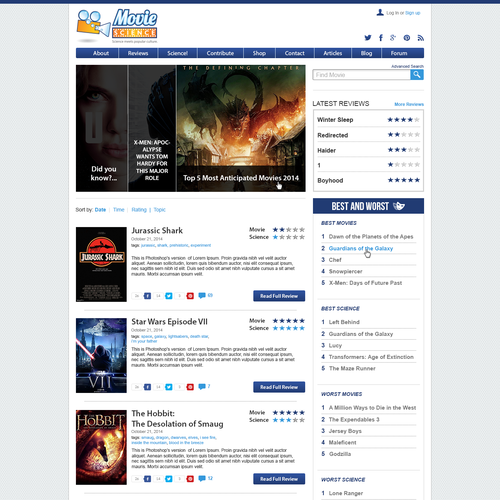 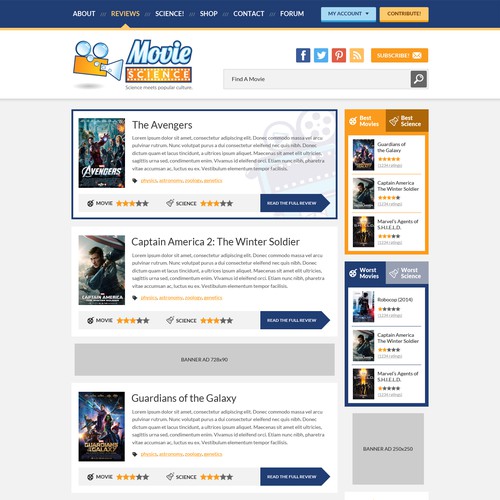 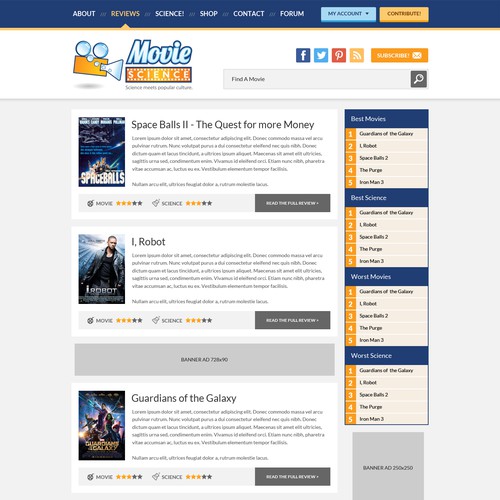 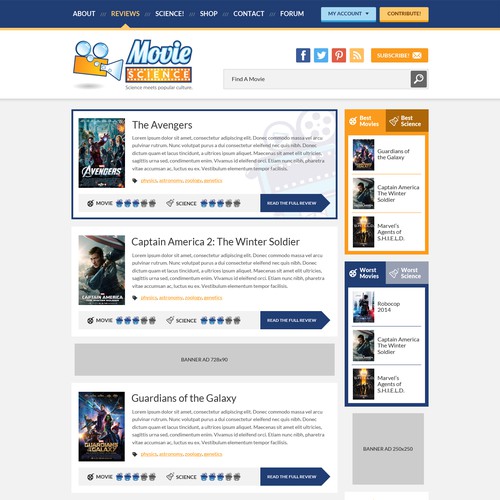 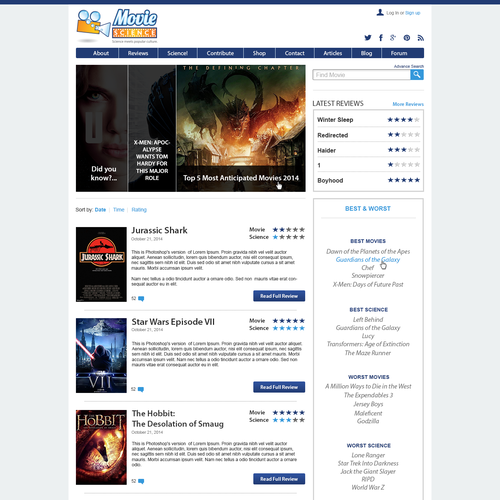 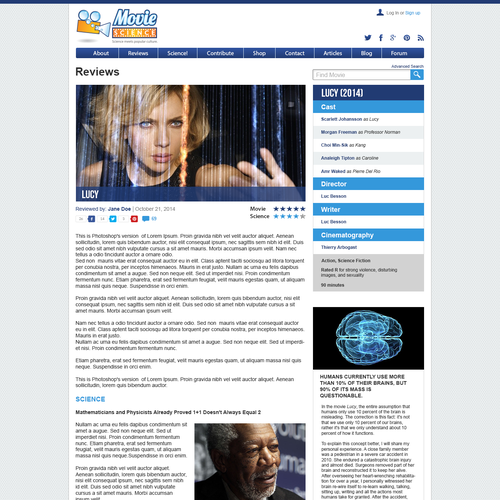 Movie Science is a web site devoted to the intersection between
science and popular culture (with - no surprise - an emphasis on
movies). It's a discussion of scientific topics at the popular level,
in a fun context. (The profit bit is unlikely and not the point!)

Movie Science is a site for movie reviews and other articles about
popular culture written by “scientists" - practicing scientists,
academics in other fields, or just writers who are genuinely
knowledgable and enthusiastic about science. The reviews are normal
movie reviews that comment on the plot, characters and enjoyability of
a movie, but also include a comment on any scientific topics touched
on in the movie and whether they were believable or absurd. Movies are
rated for their overall quality as a movie and for their portrayal of
scientific subjects. Other articles address a variety of issues
related to treatment of scientific matters in media and popular
culture.

The site is designed to appeal to geeks and science fans who will
enjoy the discussions of science in a fun setting (and who will enjoy
some snark directed at egregious movie science) and for those who want
to use the site for its educational purposes, exploring scientific
content in an engaging and relatable context.

As such, it’s a site with a growing body of content that needs to be
sorted, searched for, displayed and read.

Light and fun, draws the user's eye to key pieces of content.

I have a attached a brief with a bit more information than could fit
in this form. Please have a look at that.

Homepage: show immediately what site is about, allow quick access to highlighted content, and other ways to explore the archive.

This should be a fun project with significant scope for creativity. And some fun science would be good for the world, no?

I appreciate the work you guys do and the investment you make in submitting something in a contest. I try and be conscientious in terms of providing good feedback, and I'm responsive to questions and requests for more detail.

I will guarantee the prize the second I see the first design of professional quality, even if it isn't quite what I'm looking for.

This project is ongoing so there will probably be a little more work available for the winning or other designer(s).

See the attached brief for more info. Thanks and good luck!

Fine Art Bartending School Needs a Sexy Site Redesign!
CA$1,049
We run 9 bartending schools across Canada. Our target audience is mostly 18 to 40 year olds looking to get into the b...
27
entries
15
designers
Creating a Mindset for Educating Entrepreneurs Around the World!
US$1,049
The website homepage I need you to design for is my not for profit, IAEOU: Vowels are to words what creativity is to ...
36
entries
11
designers
Help CodeSquad empower students to escape poverty with inspiring website
USD 1,049
CodeSquad is a non-profit organization that trains talented, low-income adults from Boston's urban core to become ful...
162
entries
18
diseñadores
Create a modern website for leading education company
US$2,799
Insurance agents must renew their license every few years, We sell the courses that they take in order to renew their...
86
entries
10
designers
Help give mediatorinjeans.com a new look.
1 199 $US
I am looking for a designer who can best design my blog, podcast, online webinars and online course.
38
entries
9
designer graphistes
IVO - A site to Raise the Consciousness of Business Leaders
2.199 US$
The objective of IVO is to…. Raise the Consciousness of Business Leaders. By connecting business leaders to peers, me
58
entries
16
designers

C'est parti!
Design a fun website for kids and parents
689 £
Maths with Parents (MwP) is an online tool that supports maths education at home for schools in England. We help parents
49
entries
8
Designer
Web Page Templates For Education
CAD 1.589
MOBE which stands for "My Own Business Education", is an eduction company that caters to small business and home busines
39
entries
7
diseñadores
"Abundance Coach" needs a powerful brand & website
CA$769
WHAT - Simone is an Abundance Coach that teaches women how to raise their vibrations, and manifest money, magic and mira
59
entries
11
デザイナー数
Create Website for School
€789
Private
78
entries
37
designers
Innovative Q/A educational student networking software
US$3.099
I am creating an educational Q/A and student network platform. My competition is Brainly and you can ask Q/A questions a
13
entries
4
diseñadores
99nonprofits: Design upbeat, modern website for GWC Regalia Hire
US$599
We hire graduation gear (academic regalia) Our customers are tertiary aged students of all genders from our regional in
163
entries
29
designers
En savoir plus sur les designs de page web
Voir comment ca marche