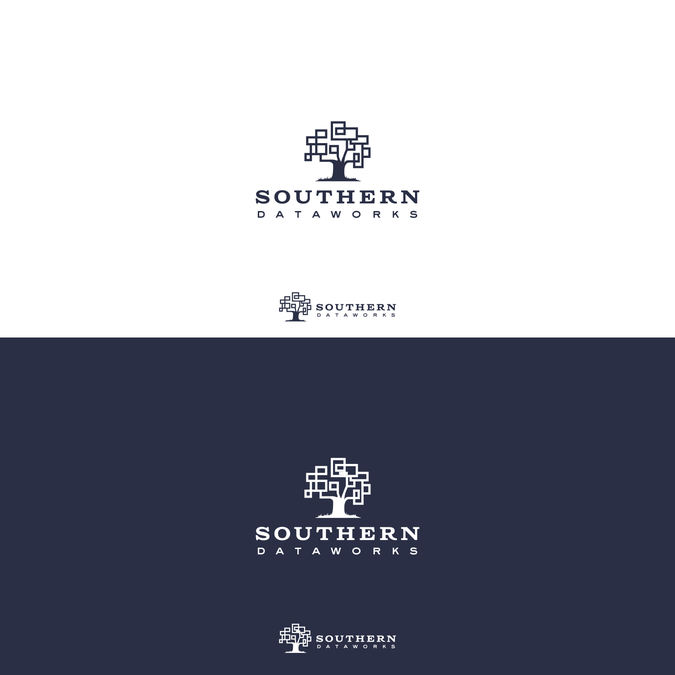 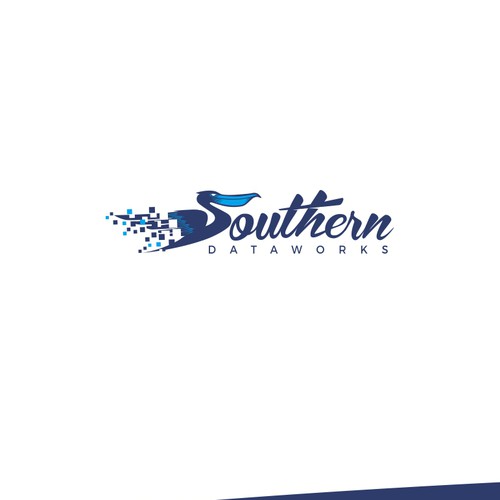 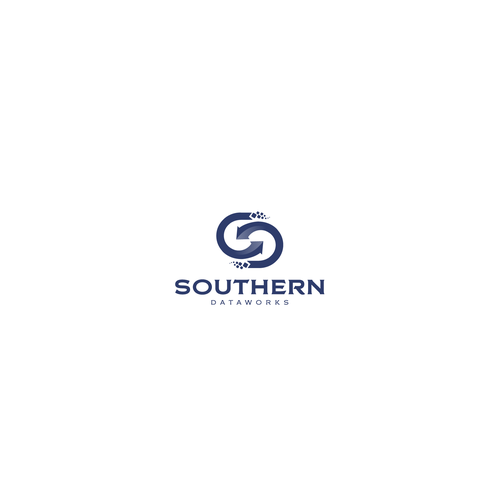 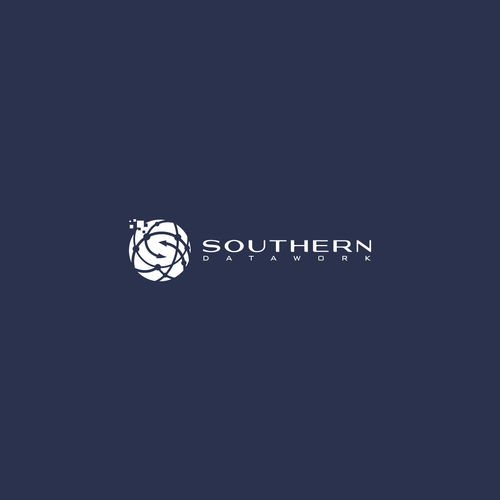 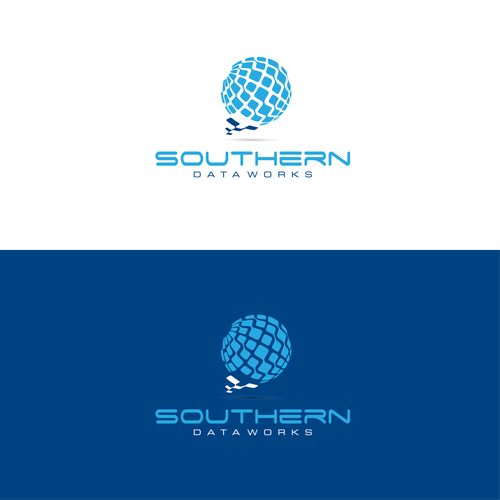 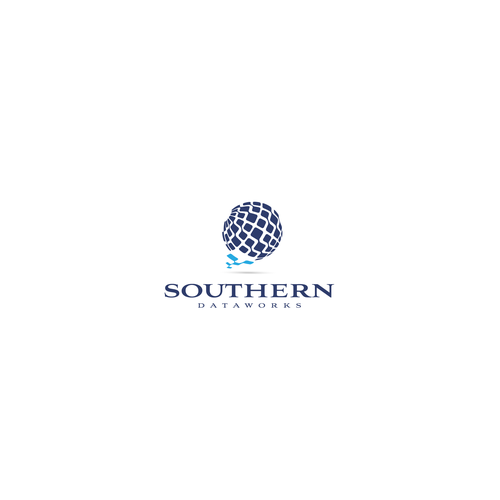 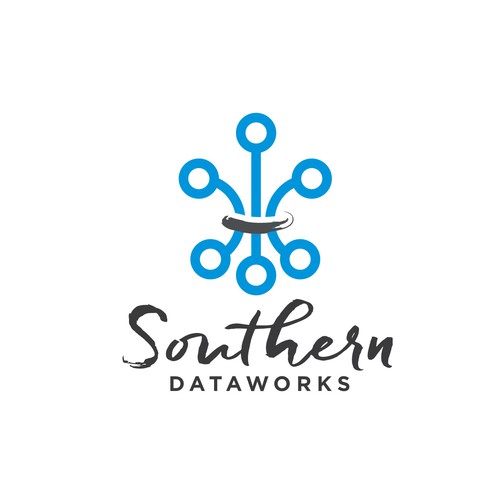 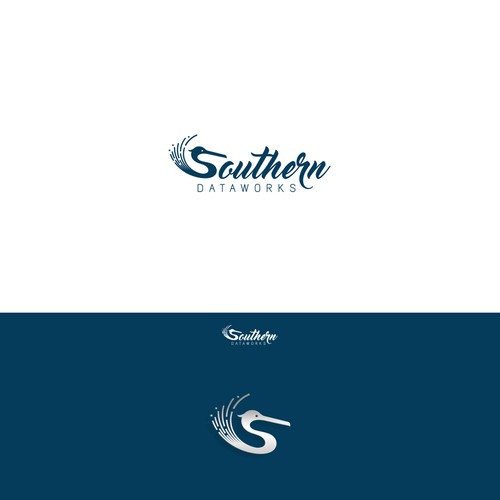 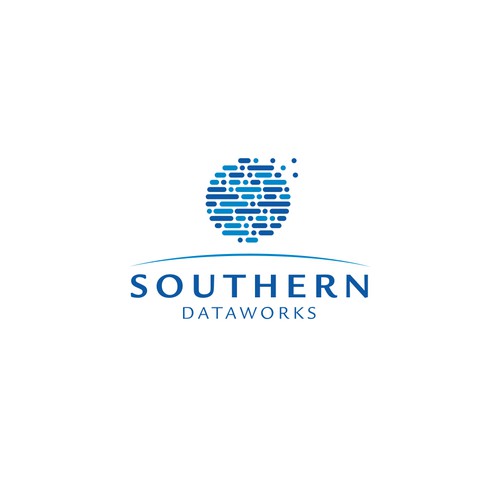 I'm a sysadmin/network engineer based out of Southern Louisiana. I just broke out on my own an started my own IT business servicing many local governments in my area. I currently do quite well as a single person LLC, however I'm looking to grow my clientele. I mainly focus on IT maintenance contracts, networking, and consulting. Since I'm a one-stop shop, I've got to be a jack of all trades, however admittedly a master of none. I'd really like to focus on the government sector, however I want it also to be marketable to small/medium business in the area.

I'm no designer, but I have seen many good designs. I'd like either the font used (or the two fonts used, if different for Southern and Dataworks) to coincide. The overall feel of this logo should give off the feeling of trust, and technology, but if the Southern US, or some other type of Southern/Louisiana logo could be integrated into the design, thereby bringing the two seemingly opposite words together in some design that fits, that would be great.

I hate blocky technology fonts. They are ugly. I'm looking a hand drawn design, something not typed out. Something extremely original.

I will give plenty of Feedback to those designers who show me original, well thought out content. I am looking for the best work 99designs can produce, as that's what I'm paying.

Let your creativity run wild, however remember the point of the business. IT/Government/Southern US.

I do NOT want to see standard, technology fonts just because this is a technology company. Nor do I want to be tied down to Louisiana as I do have business in other states. I want to see INGENUITY.

The Carrier Films logo uses a font and graphic appropriate to the company's target audience all the while being identifiable to those not in the film industry. Hart and Hound, well what really needs to be said? Fantastic ingenuity. Swipefest is also fantastic because although it's simply text, it grasps the swipe effect with some very crafty swiping motions on the logo itself. This is real logo design. I want someone to take the essence of my business (Southern IT) and integrate it into a logo that somehow can be identifiable.

Also, I care less about gradients and beautifully crafted logos than I do minimalistic, simplistic, clean logos such as Swipefest, Huvica Pets, Hart and Hound, and Carrier Films. However I also like the Dream Labs creativeness and two color scheme.

I'm not an outdoorsman, however I liked the way the one designer has incorporated something from Louisiana (the penguin) into the S. That's the only reason I like the design. I'm not an outdoorsman and I don't hunt, but I do like the incorporation of Southern US/Louisiana accents into the TEXT of the name, if possible. However, if any other designers mimics another designers entry without having original concepts, they will be eliminated.

Create a fancy logo for Social Media Platform
$ 299
Soaster is the platform for social media agency and people who use social media effectively. If you have some informatio
203
entries
45
Designer
Hackathon Logo
CHF 299
Hack Winterthur is a hackathon (https://en.wikipedia.org/wiki/Hackathon). 100 people will participate in the three-da
65
entries
12
designers
Design a high tech logo for an engineering team in a big company
£379
We are a team of engineers inside a large organization, and we build virtual servers for software developers. Visual th
111
entries
22
designers
Can you design a logo that will CRUSH the competition?
$299
We're a sales training company who helps contractors
94
entries
14
デザイナー数
Need IT-company logo
299 US$
Development mobile application, web, ERP and CRM TA business owners, top management, investors
170
entries
45
diseñadores
Association needs a new powerful logo that will capture attention
US$ 350
The association educates management and maintenance in property management as it relates to laws and legislation. we al
58
entries
12
designers

C'est parti!
Create modern logo for Kaigo Software
269 €
Bond everyone, even those who depend on someone else to live > keep the bond between people like parent-child and relati
101
entries
20
designer
Young entrepreneur needs logo for new computer company
$299
Computer assembly and repair specializing in gaming computers. Target audience is parents of elementary and middle schoo
70
entries
26
designers
Gibbs Cloud Consulting
$299
We consult to large or small corporations on cloud technologies (specifically Salesforce.com and all of it's platforms)
100
entries
22
diseñadores
Design a Certified Secure Seal
US$299
The graphic represents a "seal", "stamp", "award", or "sticker that would be applied to a product to indicates it's secu
111
entries
26
designers
My consulting business needs a "digital experience" logo
499 US$
My company is a consulting company with me as the only employee. I work with software development, performance optimi
226
entries
64
designers
Model Platform powers better decision making for farmers
US$299
We are the Climate Corporation, a digital farming application that helps corn and soy farmers make optimal decisions to
85
entries
24
designers