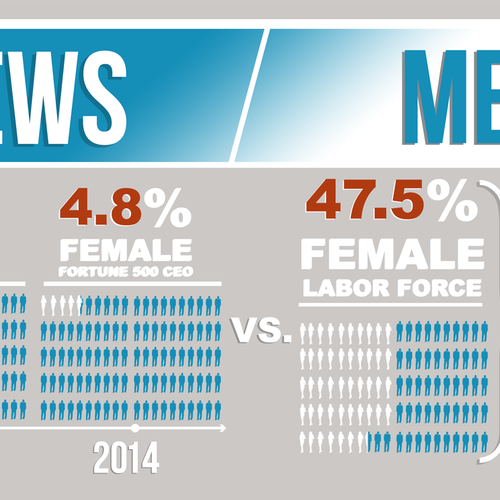 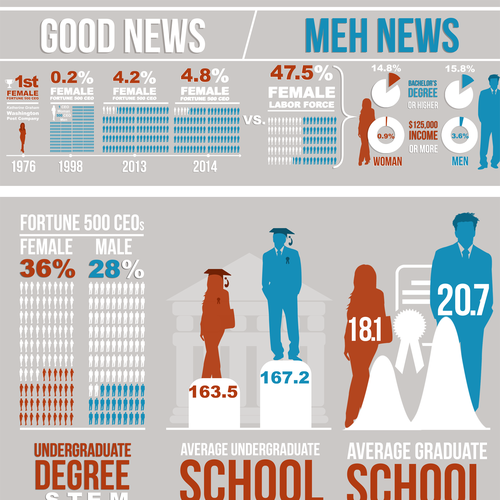 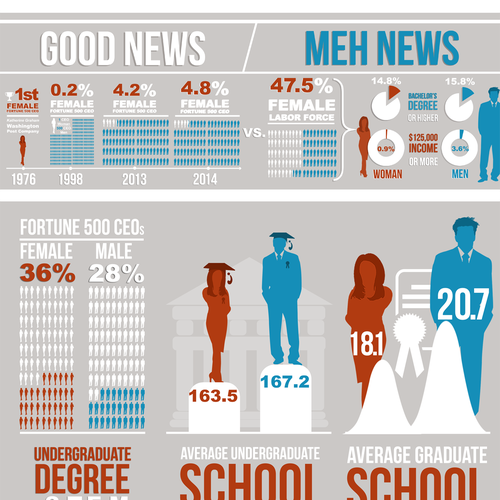 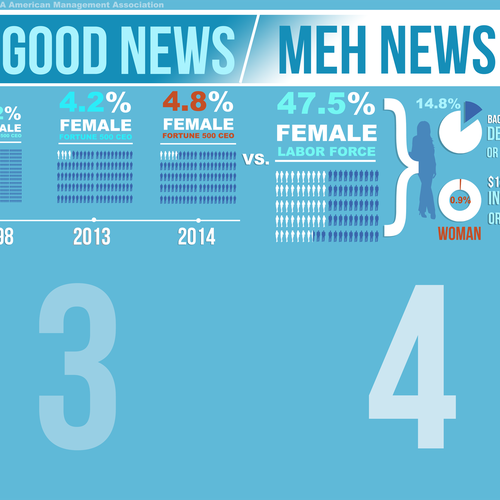 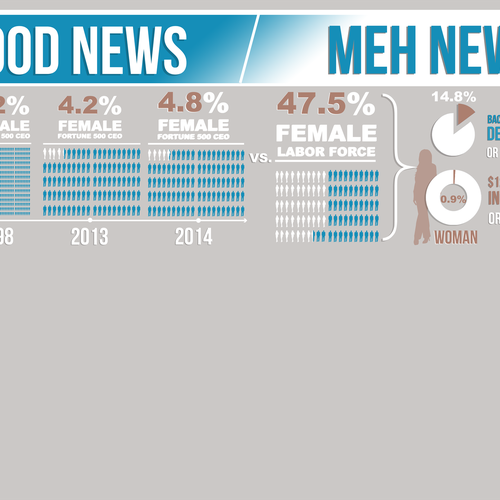 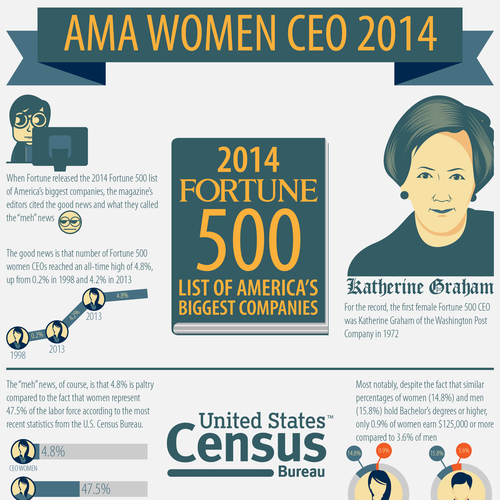 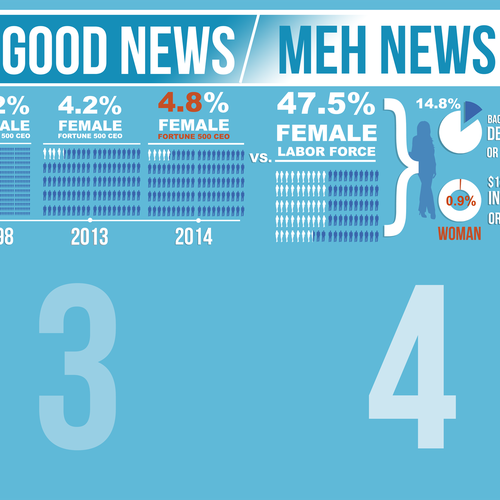 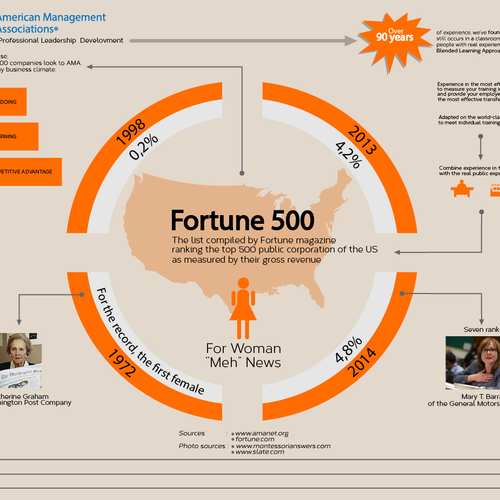 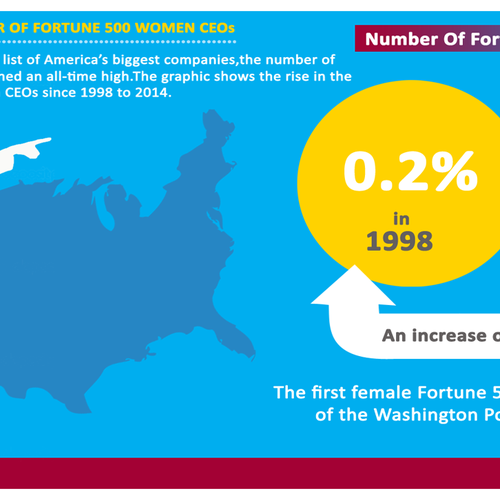 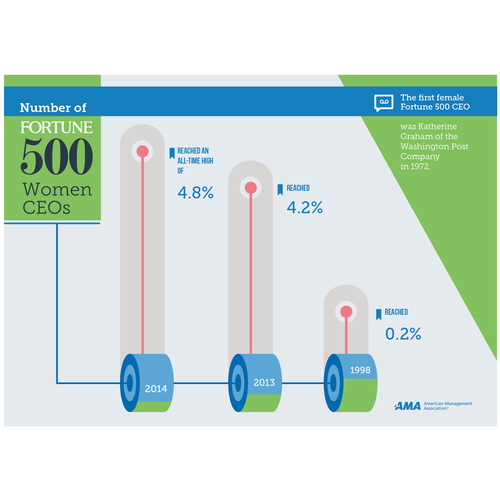 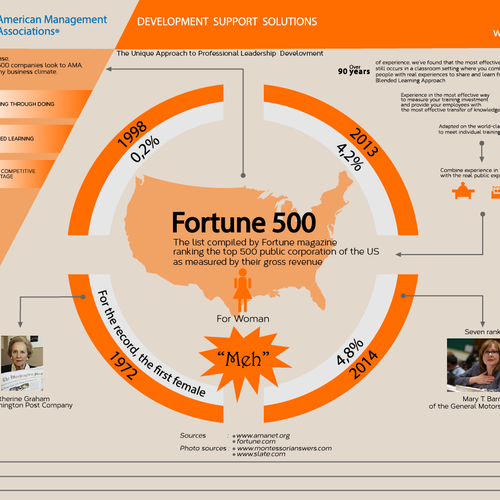 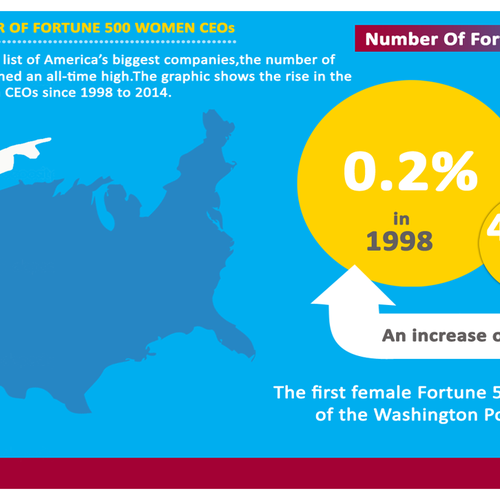 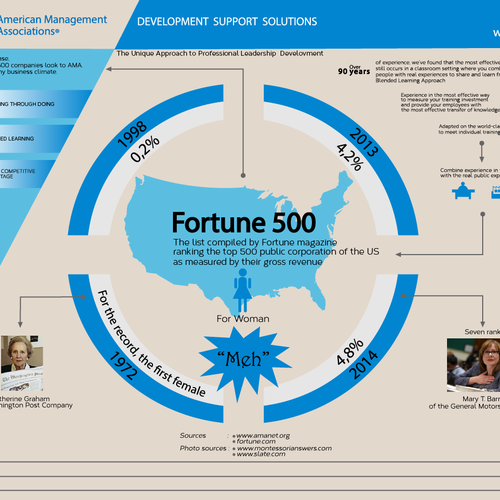 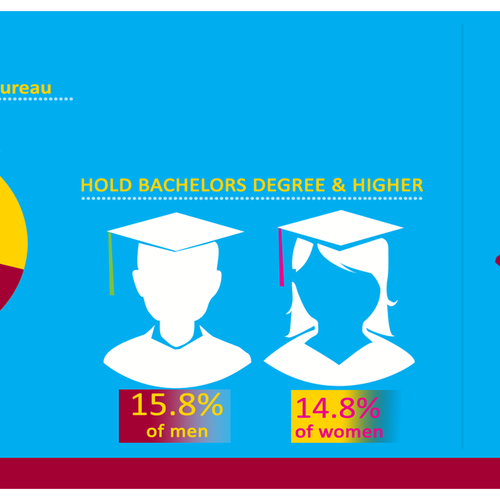 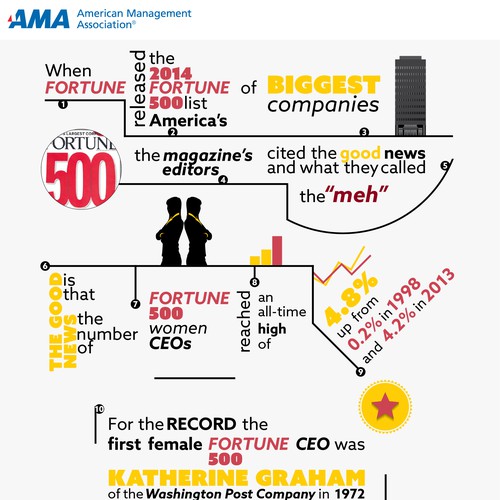 We need a set of 5 infographics to support the release of an upcoming AMA study on women CEOs in the Fortune 500. We're currently finishing up all of the data points, but we have the first few. Our goal is to identify an artist and a unique style who will work with us to create the suite of 5.

PLEASE NOTE: I'M ADDING ALL REMAINING DATA FOR GRAPHICS(SEE
BELOW)

First graphic (for style selection purposes) should support the
following information:
"When Fortune released the 2014 Fortune 500 list of America’s
biggest companies, the magazine’s editors cited the good news and
what they called the “meh” news. The good news is that number of
Fortune 500 women CEOs reached an all-time high of 4.8%, up from 0.2%
in 1998 and 4.2% in 2013. For the record, the first female Fortune
500
CEO was Katherine Graham of the Washington Post Company in 1972."

Second graphic should support the following:

fact that women represent 47.5% of the labor force according to the
most recent statistics from the U.S. Census Bureau. The Census
confirmed other widely known, yet still shocking, inequalities women
face in the workforce. Most notably, despite the fact that similar
percentages of women (14.8%) and men (15.8%) hold Bachelor’s
degrees
or higher, only 0.9% of women earn $125,000 or more compared to 3.6%
of men ."

Third graphic should support all 3 of below datapoints:

Women Fortune 500 CEOs tend to have more rigorous academic pedigrees
as evidenced by the following:

Fourth graphic should support the following:

"Women Fortune 500 CEOs have more work and life experience to be
appointed. Specifically, the average age at appointment for females is
52.8 years old versus 50.2 for males. "

Fifth graphic should support the following:

"Women Fortune 500 CEOs tend to work their way up the corporate ladder
internally . We found that only 20% for females versus 26% of males
were appointed from the outside."

of the remaining 4 infographics, 3 will be similar to the initial one with the remaining one being a "multi infographic" that will contain 4 smaller "components". Use attached AMA Brand Guidelines as appropriate, but don't hesitate to push the envelope in the quest for something cool!

Help SuperReading Ltd with a new infographic
£399
We help Dyslexics double their reading speed in eight weeks. This document is part of our Marketing.
28
entries
12
designers
Genealogy B.-The Evolution of ND Class B Athletics
$999
Innovative infographic needed.
29
entries
7
designers
Design to impress architects with a Ventilation info graphic
$599
We are a distributor for Bard HVAC equipment in Virginia who primarily target Architects, Engineers, and Schools for ...
69
entries
21
designers
Infographic for our hair care survey results
US$ 599
We are a hair care book publisher for women of color. We specialize in hair care for women of African descent with ve...
16
entries
8
designers
Create an infographic conveying Ulearning as the preferred alternative for online course instructors
$599
27
entries
14
designers
Teaching Doctors Better: A new model for medical education
CA$799
This infographic is for a presentation for a job interview. I am applying to be the assistant dean of postgraduate m...
49
entries
13
designers