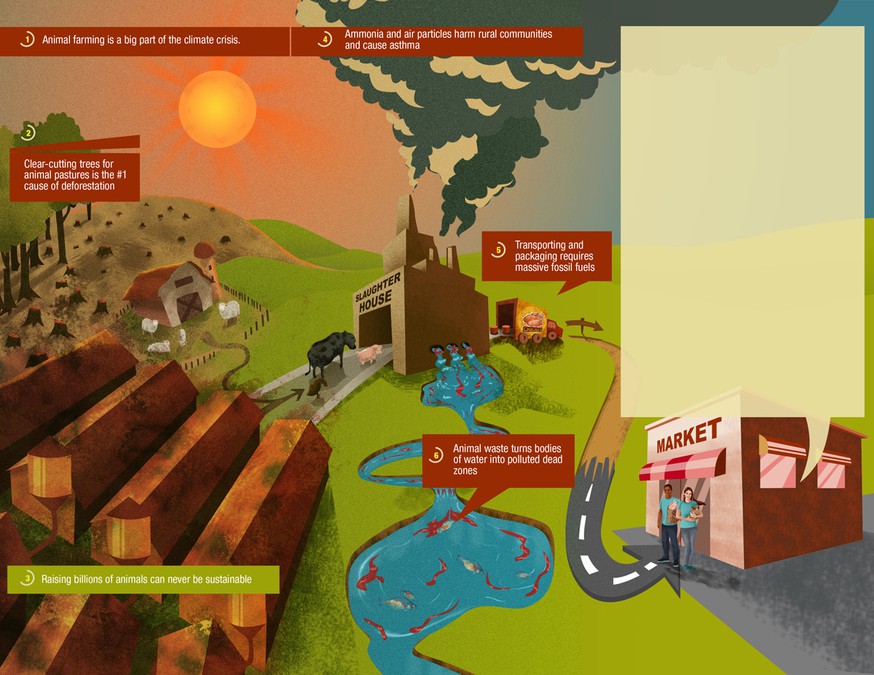 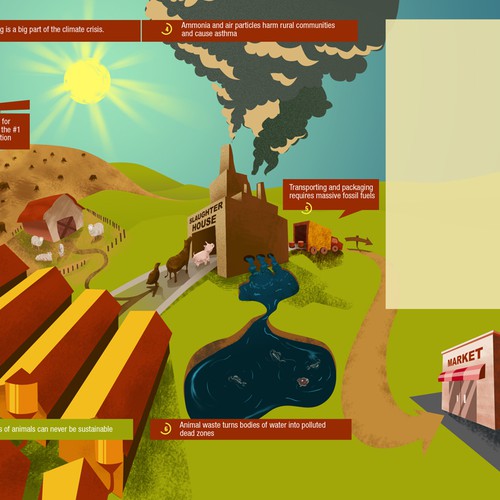 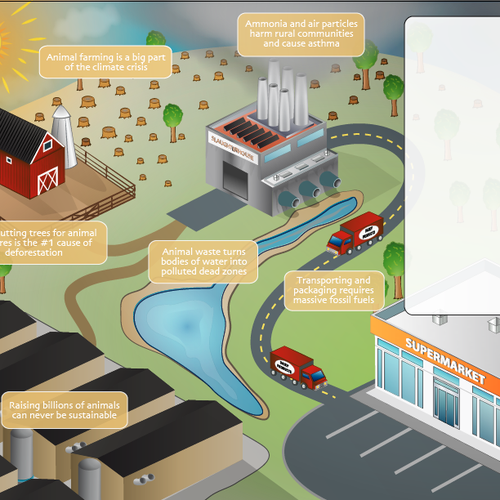 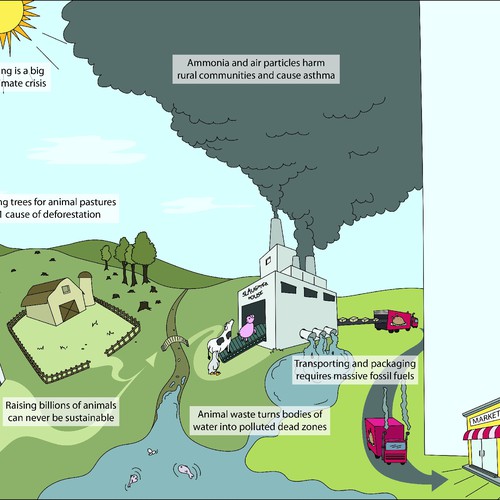 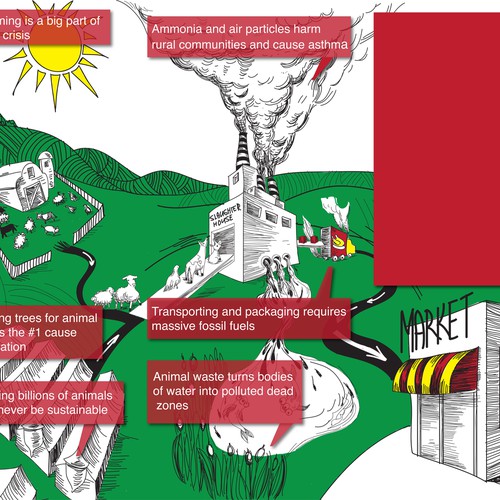 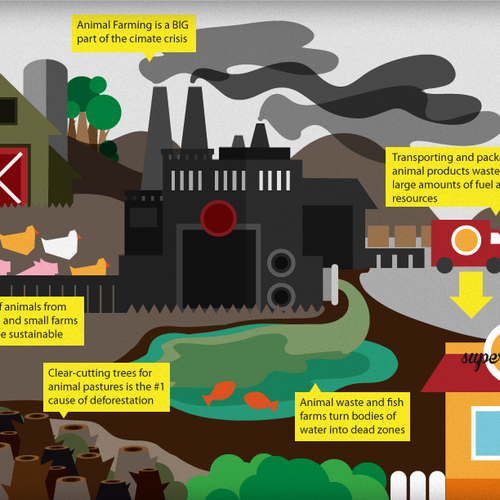 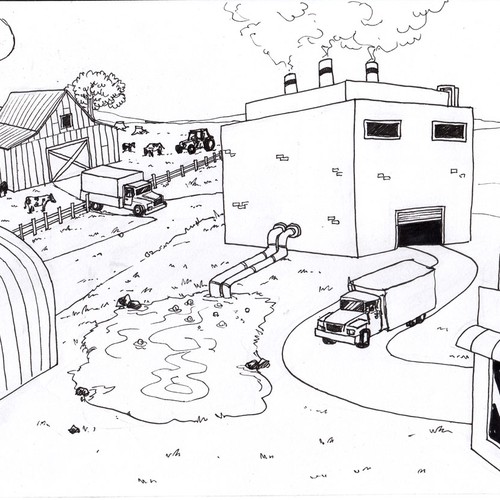 We target teenagers and college students with information about the grim reality of animal agribusiness and we work to help our audience move towards a vegan or near-vegan diet.

We are seeking a full page, full color, 11" x 8.5" illustration, horizontally aligned, for the inside of a trifold brochure. After this project is finished, we may seek the winning illustrator's services for the cover as well (folded at ~3.7" x 8.5"). Please see the attached mock up sketch for guidance; however, please do not follow it exactly.

The illustration would be one cohesive image (not a collage of images) showing how raising animals for food -- whether on large or small farms -- contributes to air pollution, global warming, water pollution, and deforestation/habitat destruction. The image should look somewhat ominous and daunting, except for the righthand side by the consumers, who are in naive bliss.

I envision that there would be room for a "headline" of each environmental problem, so each of the following areas would need to be spread out enough from each other that each could fit 7-10 words:

The sun: "Animal farming is a big part of the climate crisis"(Note difference from sample illustration: The sun should be glaring hot on the left - not obscured by the smoke)
The smoke: "Ammonia and air particles harm rural communities and cause asthma"(Note: Smoke should be ominous and cloud up much of the sky aside from the glaring sun)
The lagoon: "Animal waste turns bodies of water into polluted dead zones"(Note: A stream that feeds into the lagoon could serve
both as a drying-up source of irrigation above the slaughterhouse and and as recipient of
animal waste after the slaughterhouse)
The farms: "Raising billions of animals can never be sustainable"(Note difference from sample illustration: The small farm and the factory farm should be next to each other, *both* bringing animals into the slaughterhouse.)
The forest: "Clear-cutting trees for animal pastures is the #1 cause of deforestation"(Note difference from sample illustration: The forest should be mostly cut down, next to the small farm, with only a couple trees standing)
The truck: "Transporting and packaging requires massive fossil fuels". (Note: the truck should be driving in the direction of the market)

The upper right text box should be large, with the grocery store tucked into the bottom right corner. The final text in the text box is still being finalized, but would likely expand on each of the above points. Therefore, maybe there should be a number or an icon near each of the Headlines that corresponds with the expanded text in the box on the right.

Please email Michael@farmusa.org if you have any questions.

Create a cheeky monkey mascot
US$249
Freebie Monkey will become a destination where people can find out where to obtain free stuff. magicfreebiesuk.co.uk ...
117
entries
45
designers
Design a Map Illustration of DC, Highlighting Key Points of Interest
$699
We're an educational nonprofit that administers academic and internship programs to high school, college students and...
48
entries
10
designers
Create an illustration representing sexual exploitation on social media
169 GBP
The WISH Centre is a registered charity which provides self harm, sexual and domestic violence support and recovery f...
26
entries
7
diseñadores
A Hidden Jewel in South Carolina
US$ 249
I need to create a graphic that I am going to use to promote an event....
27
entries
14
designers
Create a Sophisticated and Unique Debutante Image with a Hint of Vintage Couture
249 $US
Non-profit sorority that serves the Essex County community in NJ....
38
entries
15
designer graphistes
Inspirational Illustration for Someday Is Now Global Social Movement
US$249
Someday Is Now is a global online community that provides, inspiration, support and resources to help people accompli...
113
entries
43
designers

C'est parti!
Support "Fight Cancer" with clear and cool clipart logo
€509
FCF is the umbrella brand of a foundation that markets various products. All products serve in function or mode of ac...
112
entries
37
designers
Create striking campaign image for digital privacy group promoting democracy and cybersecurity!
$899
EPIC (the Electronic Privacy Information Center) is a public interest research center in Washington, DC. EPIC was est...
41
entries
15
designers
Sheepdog Connection logo
US$549
Sheepdog Connection is a non-profit organization established to honor my son who died last year at 21 years old. The...
42
entries
17
designers
A growing grape vine map illustration
£419
We are a modern, lively and growing church. We have a vision to reach people in every part of the Wirral Peninsula. W...
62
entries
13
designers
Bacon Family Crest
349 $
The Bacon family consists of Jono, Erica, and Jack. Jono runs Jono Bacon Consulting, where he provides community strateg
10
entries
7
Designer
Vision 2020 Graphic
US$349
We are a church of 2,000 in Tulsa OK. We are targeting our church members and outside donors for a future building proje
106
entries
13
designers
En savoir plus sur les designs de illustration ou graphismes
Voir comment ca marche