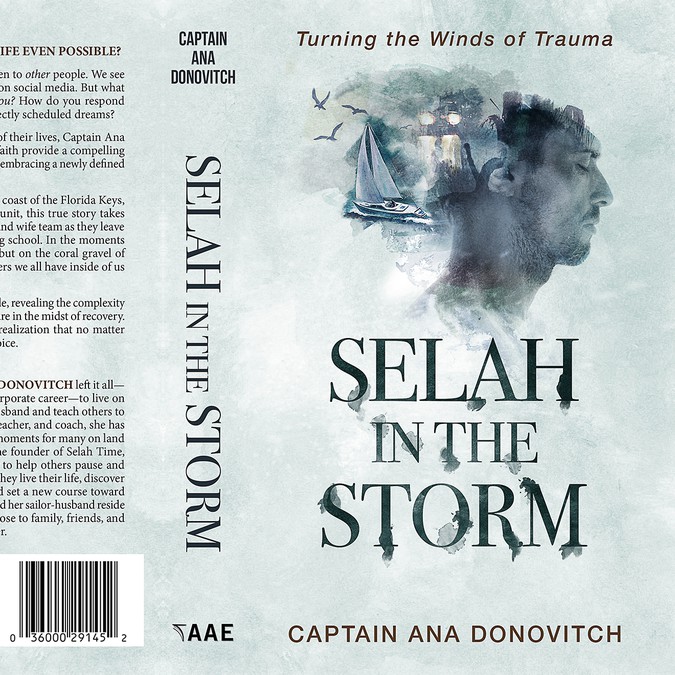 Help design my book cover for Selah in the Storm 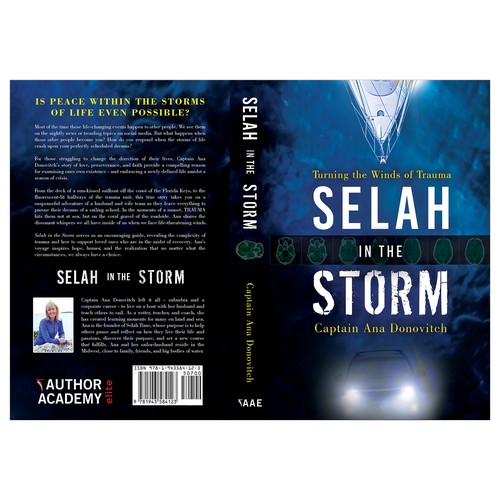 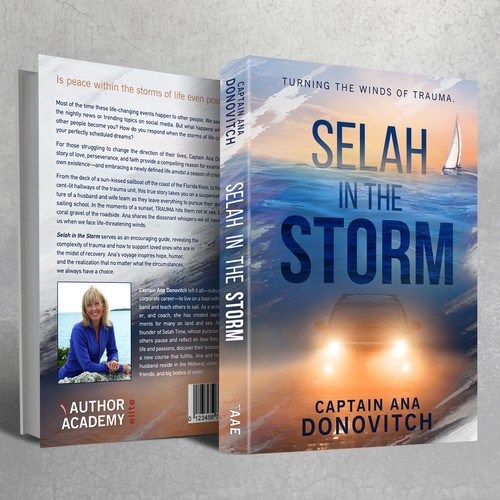 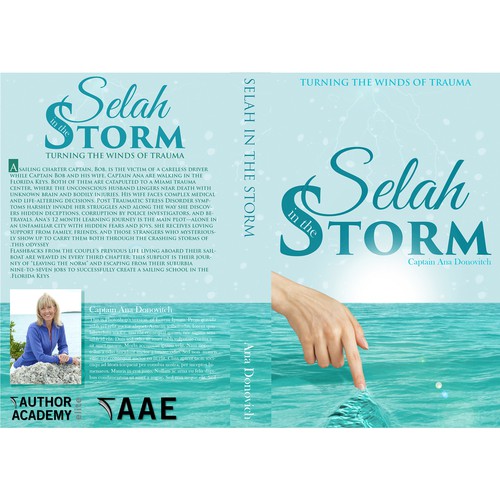 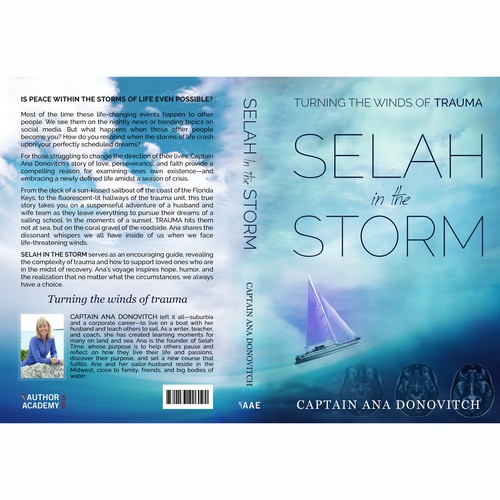 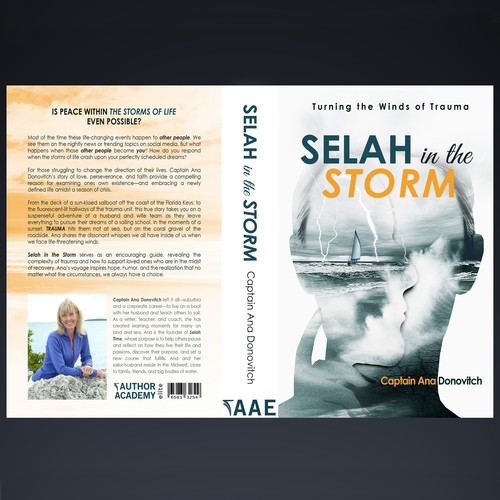 I am an author who writes creative non-fiction (a true story told in a creative way). The target audiences for this project are those who have experienced a trauma catastrophe, their caregivers, friends and families. A secondary audience is adventurers, especially sailors as there is a sailing subplot in the book.
Here is a confidential description of the book:
A sailing charter captain, Bob, is the victim of a careless driver while Captain Bob and his wife, Captain Ana are walking in the Florida Keys. Both of them are catapulted to a Miami trauma center, where the unconscious husband lingers near death with unknown brain and bodily injuries. His wife faces complex medical and life-altering decisions. Post Traumatic Stress Disorder symptoms harshly invade her struggles and along the way she discovers hidden deceptions, corruption by police investigators, and betrayals. Ana's 12 month learning journey is the main plot—alone in an unfamiliar city with hidden fears and joys, she receives loving support from family, friends, and those strangers who mysteriously show up to carry them both through the crashing storms of this odyssey.
Flashbacks from the couple’s previous life living aboard their sailboat are weaved in every third chapter; this subplot is their journey of “leaving the norm” and escaping from their suburbia nine-to-seven jobs to successfully create a sailing school in the Florida Keys.

I need a creative non-fiction book cover (looks more like fiction than non-fiction). This has potential for two follow up project in the series. On the front cover I need the title in the middle, largest font, SELAH IN THE STORM. I also need the author's name under the title or lower, CAPTAIN ANA DONOVITCH. (note: this in my pen name; my real name is Ann Brainard.). And then the tag line at the very top TURNING THE WINDS OF TRAUMA. I will have an author's photo on the back cover. The book cover will come in two versions: paperback 5.5 x 8.5 inches (Create Space specs) and 5.5 x 8.5 (Ingramspark specs). 460-465 pages. Their websites have the correct dimensions, bleeds, etc.

I want you to have creative freedom with the design. That said, I do have a few ideas in terms of direction. None of the attached pics below are supposed to be used, but can be. These are simply ideas for inspiration. I would like additional photo ideas for the trauma effect if possible. Also, if stock photos are used, it's best that they are free or inexpensive because I don't want to pay high royalties for the books that are sold.

General ideas: The cover needs to connect with idea of trauma; The secondary plot has to do with sailing, so would like a subtle hint of this in some way. There is irony in the book title as “Selah” is the opposite of Storm. Perhaps have the title text fragmented, energy or perceived movement with the title text with one of the words (Selah OR Storm). The word “Selah” means “be still, pause” – thus the “Storm” is the opposite in meaning and the cover could play off of these opposites.

Idea #1 Have the car headlights coming at you, with subtle reverberating lights of brain CT overlay (Captain Bob suffered brain injury). See attached variation of this.

Idea #2—Point of view overlooking the deck of a sailboat, have the accident scene out on the water.

The back cover will have text and author's photo. I can supply the final text when I decide on the final cover but a text draft is on the variation attached, use that if you want. Also the back cover and spine could bleed over the design from the front cover, to create the feeling of one continuous image on front and back. Please note: feel free to use your creativity. Surprise me. You may be thinking something I am not. Also, I've added some covers that I like that may give you more ideas.

D M D Group LLC needs a new book or magazine cover
US$ 299
We mentor and provide alternative methods to for at risk children to become the worlds future leaders and not…
127
entries
14
designers
Midlife Upswing needs a new book or magazine cover
US$299
Blog about hitting midlife - humor, challenges, learning, etc.
31
entries
11
diseñadores
Book cover featuring a Hermit Crab for "Cheers, Donna V."
799 USD
women's spiritual self-help books
158
entries
43
designer
Create a magnificent design for my spiritual hardcover book
US$799
I teach about the real requirements for permanent happiness and fulfillment....
305
entries
58
diseñadores
Create a winning cover for my book
US$499
I am a life coach and de-stress expert . I do sessions with clients . I do talks....
218
entries
39
diseñadores
Create a Book Cover for The Space Between
US$299
Meta-Awareness, Framing and Yoga
71
entries
19
diseñadores