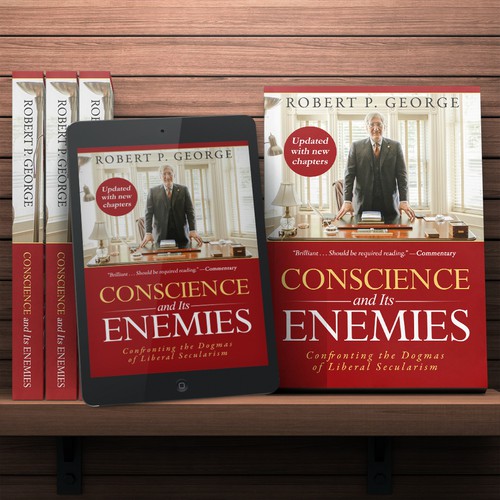 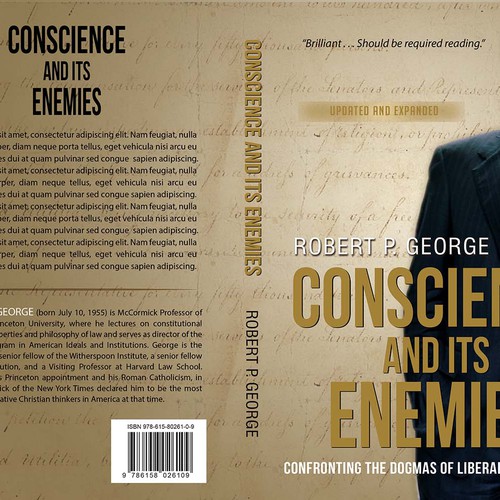 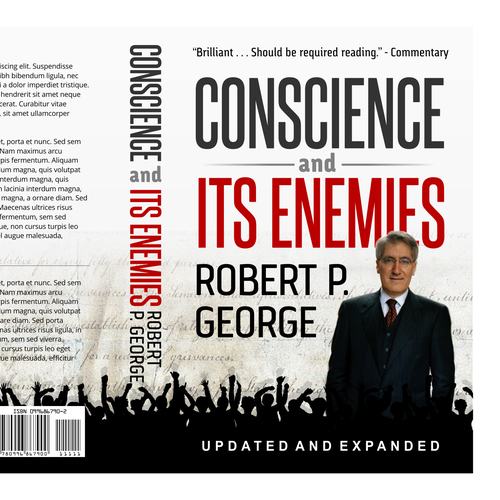 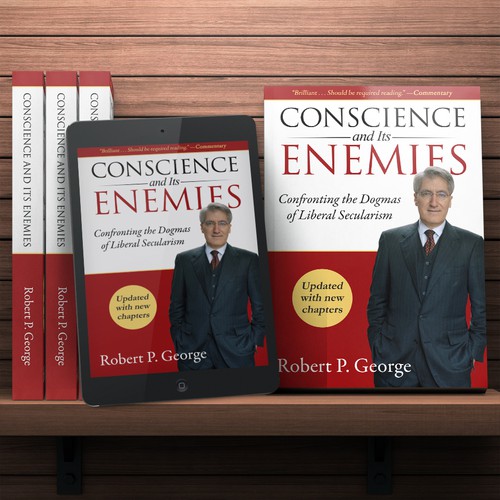 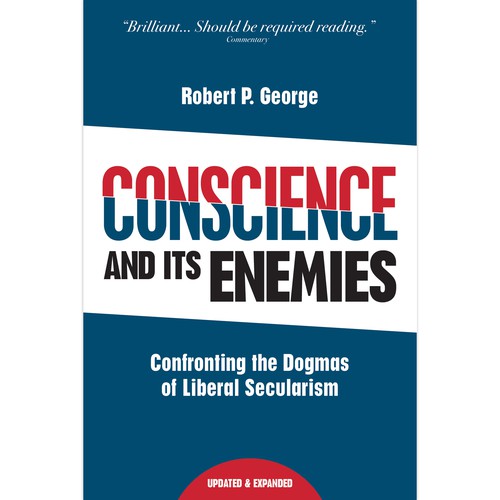 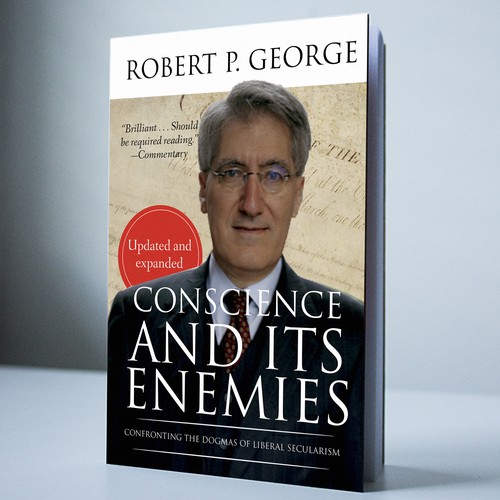 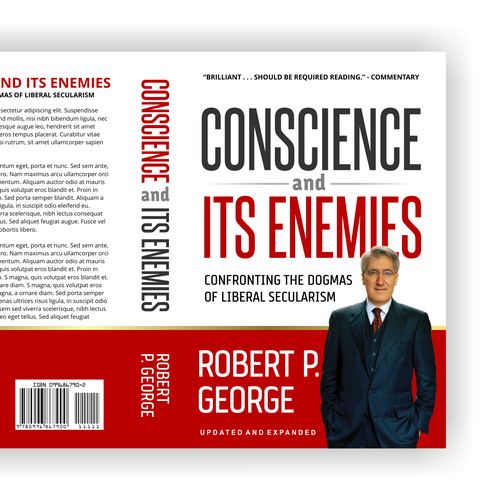 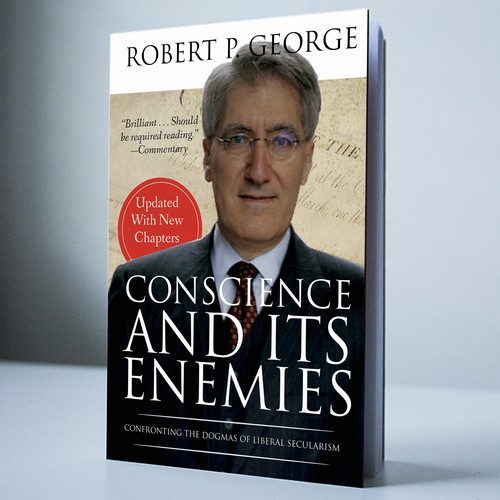 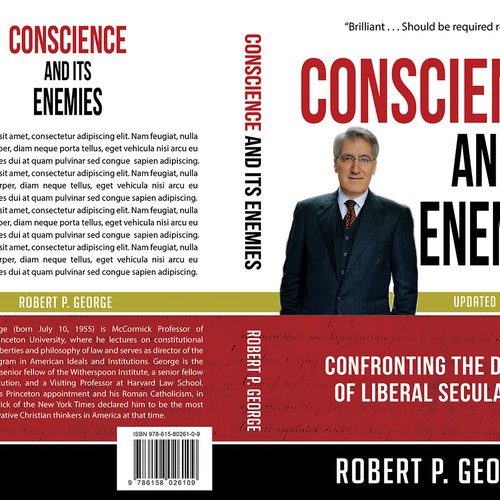 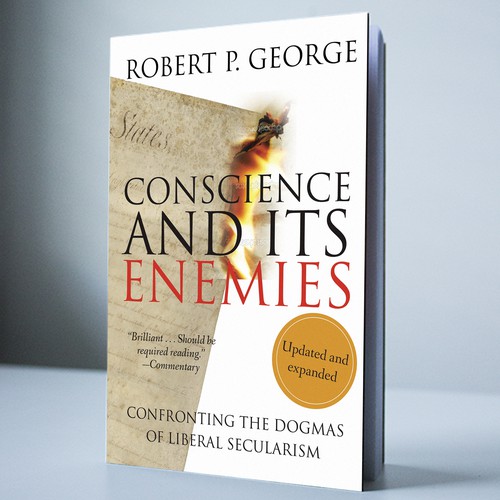 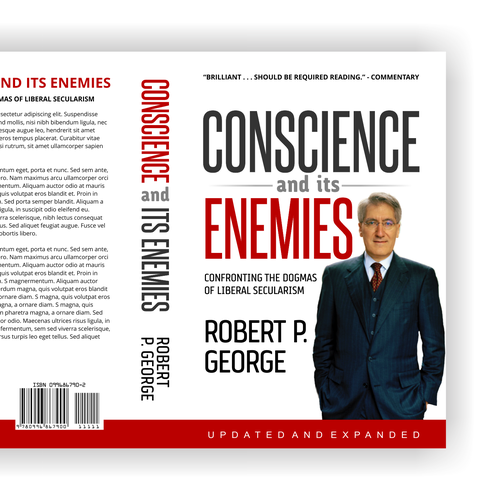 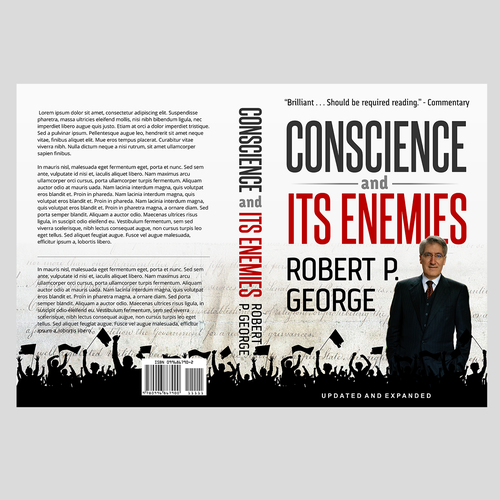 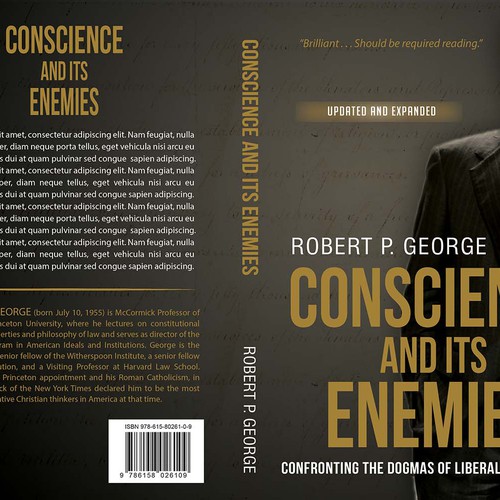 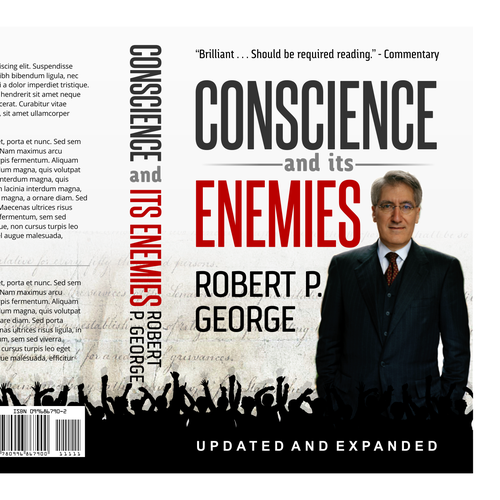 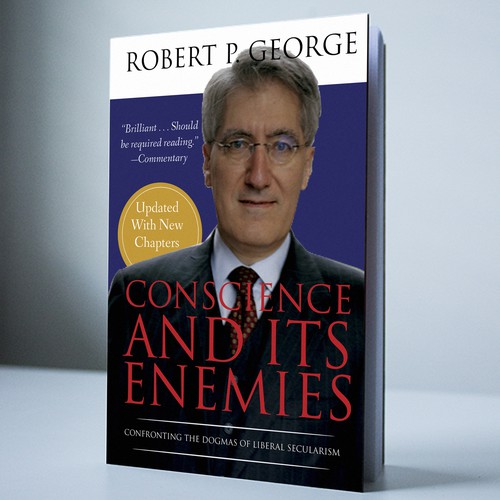 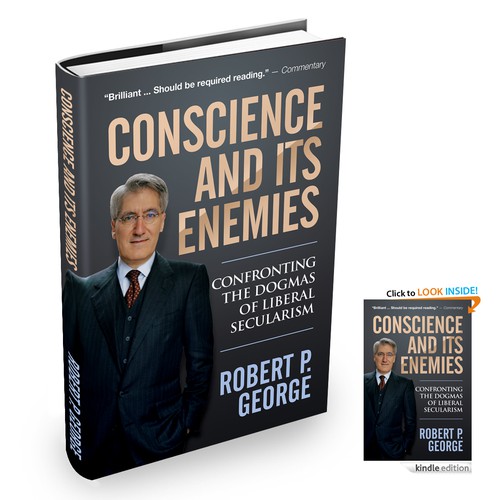 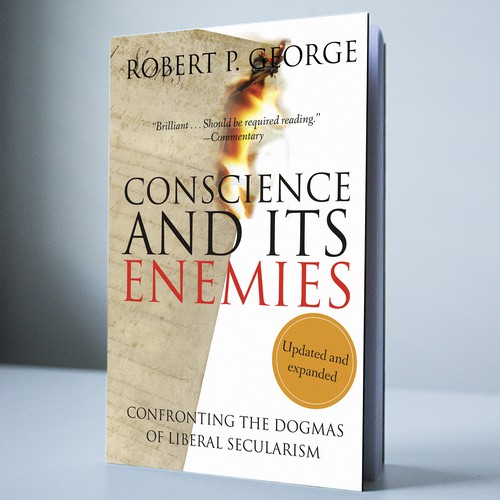 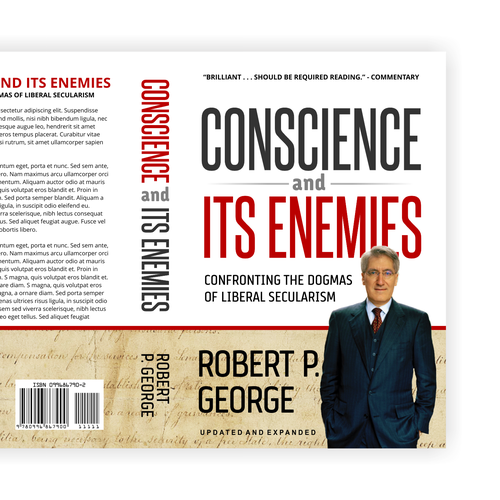 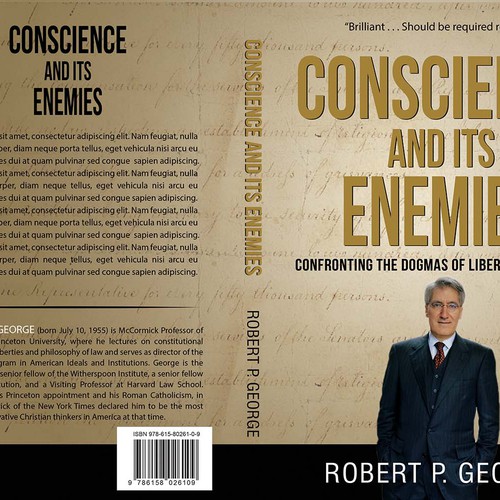 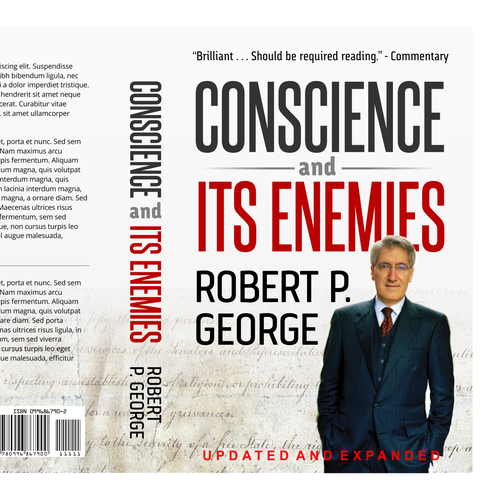 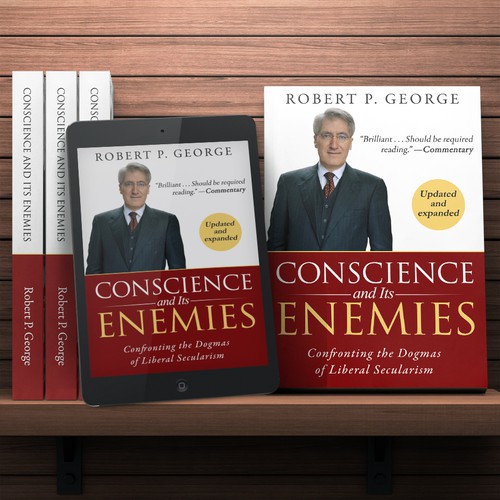 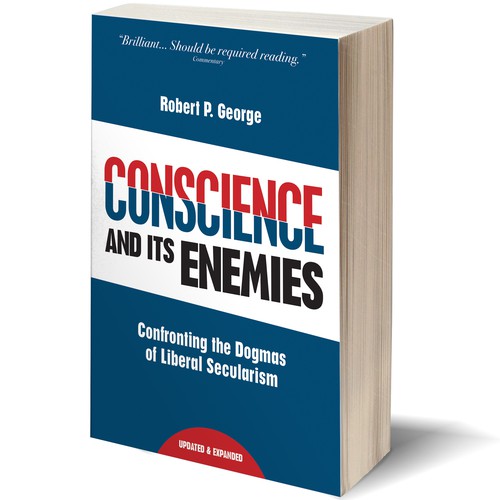 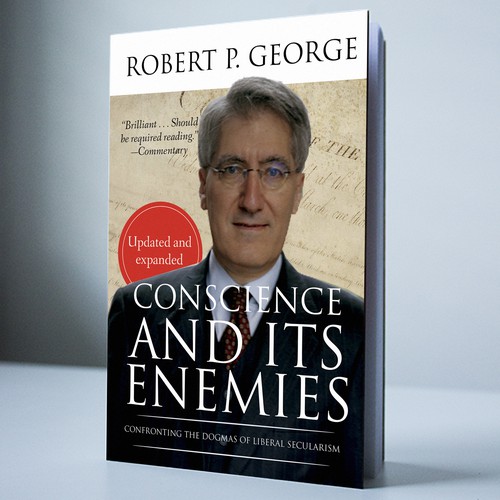 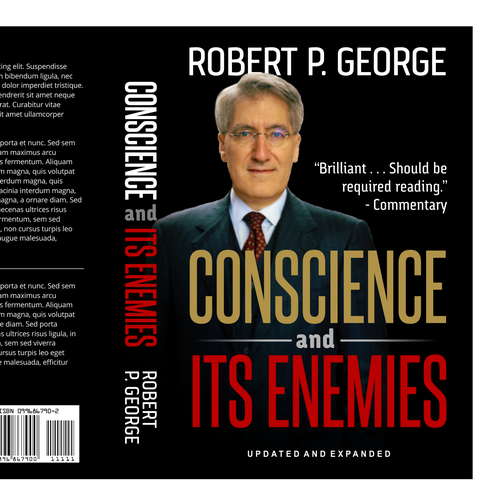 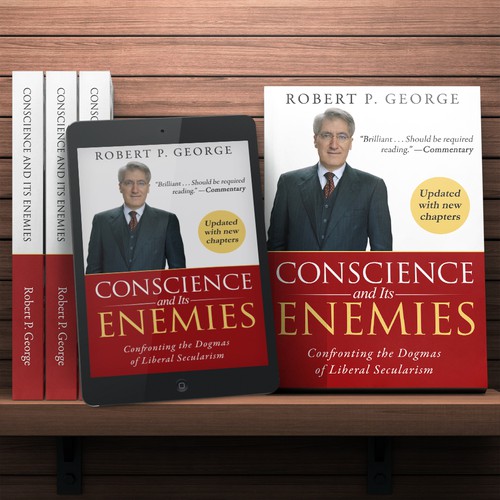 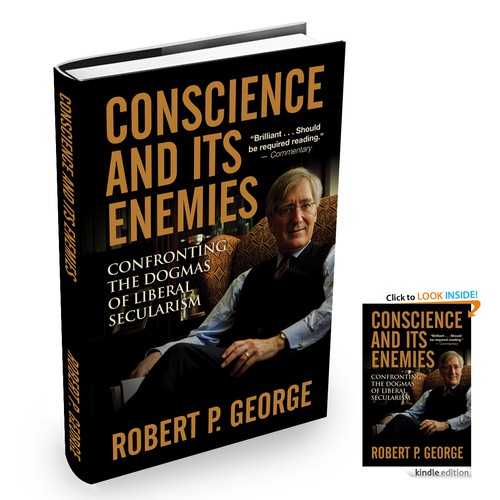 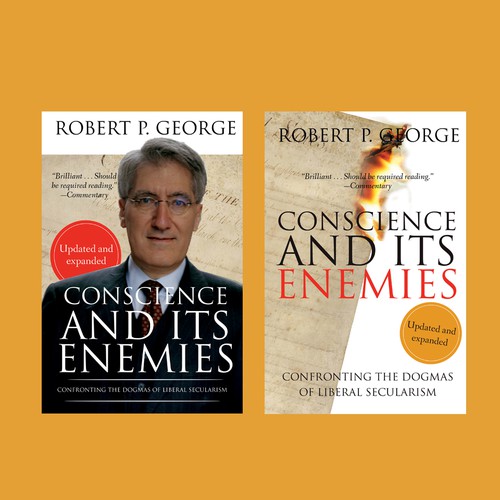 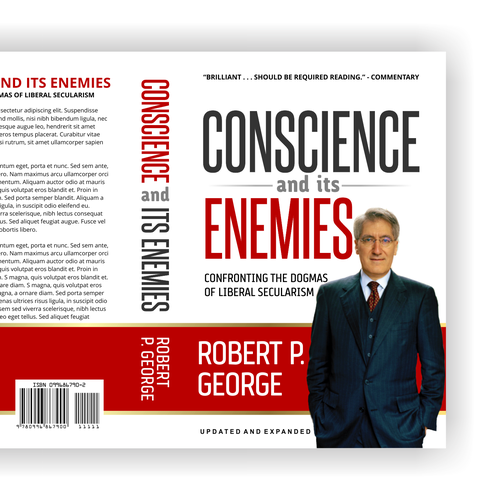 ISI Books is looking for a new cover design for the paperback edition of Robert P. George's book *Conscience and Its Enemies: Confronting the Dogmas of Liberal Secularism.* *Conscience and Its Enemies* was originally released in hardcover in June 2013 and has been well reviewed in places like the New York Times, the Washington Times, Commentary, and First Things, and has sold well.

You can see the hardcover jacket design here: http://www.amazon.com/Conscience-It…610170709/. The hardcover design is solid, but we're looking to freshen the packaging for the paperback, which we expect to sell for many years to come.

As the title conveys, the book is very much about present-day debates. Robert George argues for rebuilding the moral order and gets into hot-button issues like abortion and same-sex marriage. Here is a NYT Magazine profile of George to give you a sense of his ideas: http://www.nytimes.com/2009/12/20/m…wanted=all

TITLE: Conscience and Its Enemies

MARKETING LINE (STARBURST OR BAND OR SOME SUCH): Updated and expanded

1) TYPE-DRIVEN: On the hardcover (http://www.amazon.com/Conscience-It…610170709/) we went with a type-driven jacket--strong sans serif title type, with an image of the Constitution's First Amendment (about religious liberty) along the left-hand side.

We are still open to a type-driven approach if you would like to try that. We like strong type on the title.

One other idea (maybe a bad one!): Maybe do something with the word “Conscience”—making the text itself appear to be crumbling, or under attack in some way .

2) USING IMAGERY:
a) The hardcover uses a close-up image of the text of the First Amendment that reads, “Congress shall make no law respecting an establishment of religion, or prohibiting the free exercise thereof.” See this image or the one attached: http://www.archives.gov/exhibits/ch…oads.html) (For a comparable title, see this book: http://www.amazon.com/STILL-HOLD-TH…191926/ref

b) Maybe we could do something similar with the text from the Gettysburg Address that says “This nation under God.” See how First Things ran a shot of the Gettysburg Address etched on the Lincoln Memorial in an article by Robert George (our author): http://www.firstthings.com/article/…gettysburg. But this approach could easily get too busy with all the type elements.

c) Another approach would be to emphasize the theme of religious liberty/freedom of worship. It’s a smaller part of the book’s broader theme, but it does run through a lot of the essays. Maybe something like Norman Rockwell’s “Freedom of Worship”—although I suspect the rights fee for that image would be very expensive: http://curtispublishing.com/artists…doms.shtml

d) Other thoughts on images?

3) AUTHOR PHOTO ON FRONT: Another approach would be to do a big author photo on the front cover. See the attached image (which is low-res and FPO, but we could get you a higher-res image if you wanted one).

Here are some comparable titles: http://www.amazon.com/One-Mans-Amer…454363/ref

*Final cover files should be delivered in Adobe InDesign.*

C'est parti!
Create a stop-in-your-tracks cover for the book LEARNING LOVE
US$299
Resurrecting the Relational Christian Life
135
entries
30
designers
Create a striking and eyecatching cover for kindle book
£199
Purely Social is a social care company that provides services and consultancy for vulnerable people and their carers....
241
entries
39
designers
THE LUCKY ONE - book cover for true story about Sex Trafficking & Rescue
299 $US
As a survivor of human trafficking herself, author Jenni Jessen, knows firsthand the depths of trauma a body can endu...
73
entries
14
designer graphistes
Design a dazzling book cover for Gone Ahead
299 US$
Writing a book! I'm sharing about my experience with losing my dad to cancer and hoping to encourage others who may b...
52
entries
17
diseñadores
Create the cover for an exciting book proposing a New Way forward in the LGBT/Religious Conservative Impasse
$299
Written by authors reflecting this same diversity religiously and sexually
51
entries
12
designers
Design a book cover for a budding author hoping to help heal the world of Multiple Sclerosis
US$299
This book starts as a memoir about a woman's process through life with Multiple Sclerosis, the incurable disease. The...
81
entries
28
designers
En savoir plus sur les designs de couverture de livre ou magazine
Voir comment ca marche