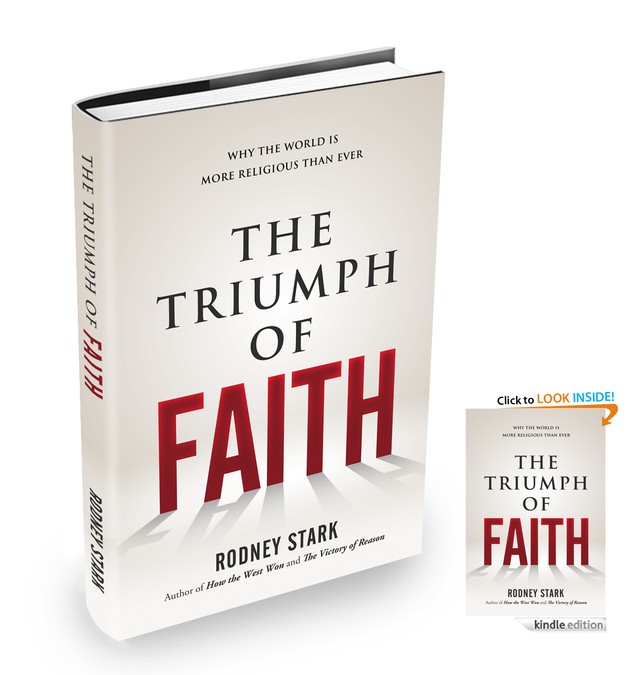 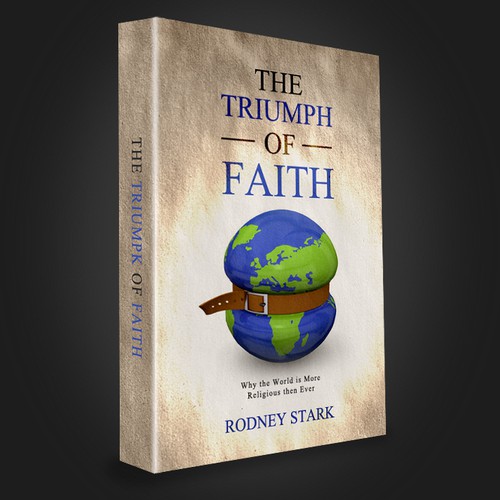 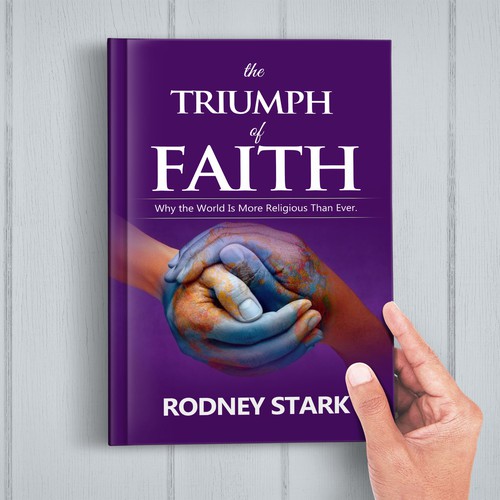 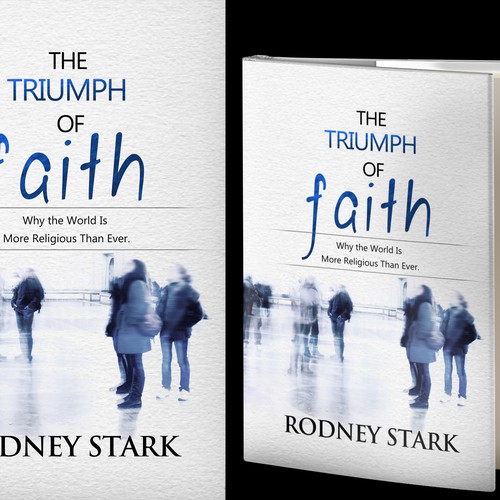 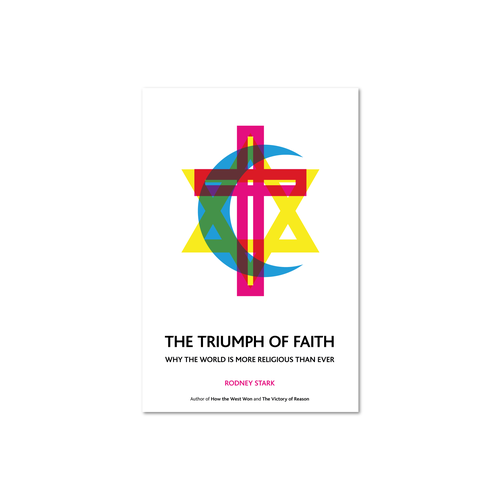 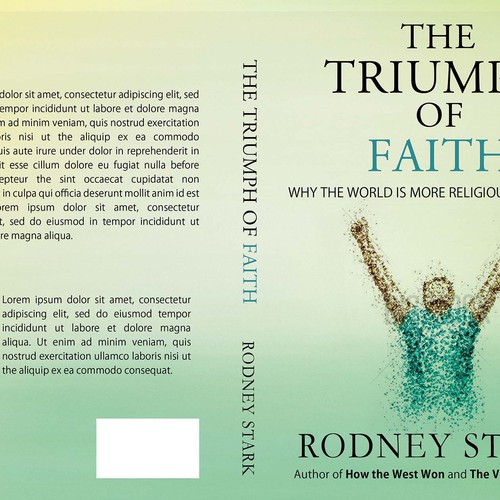 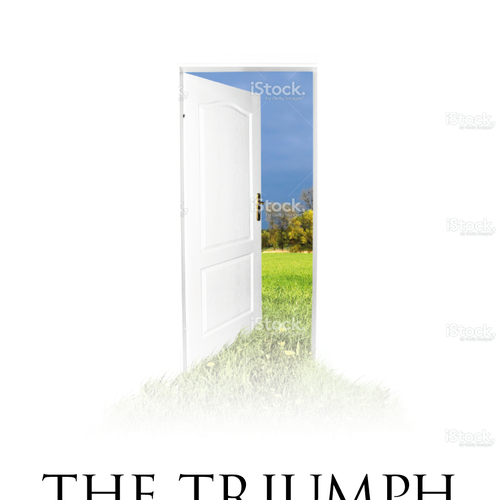 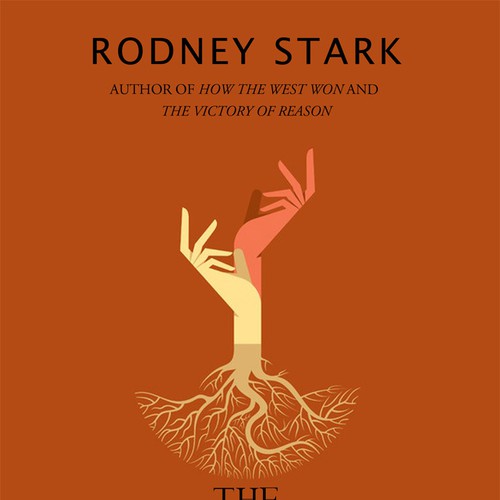 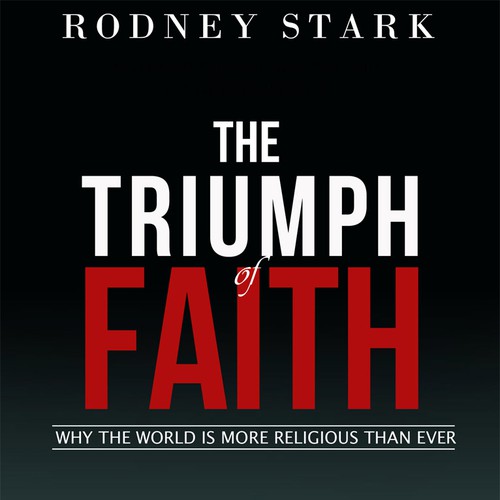 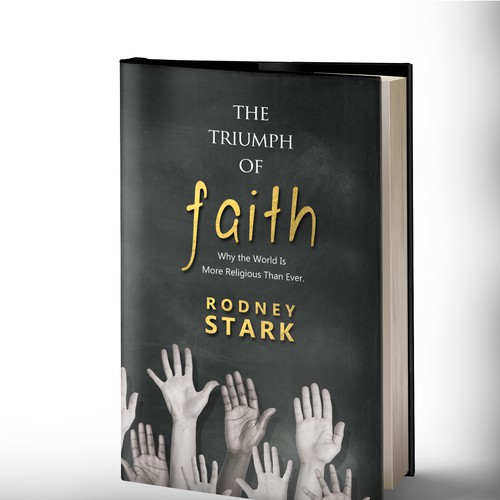 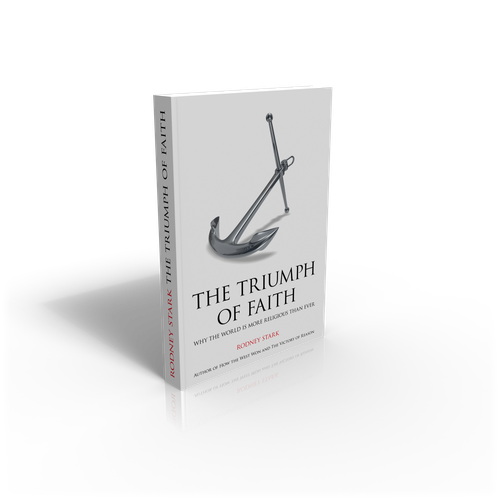 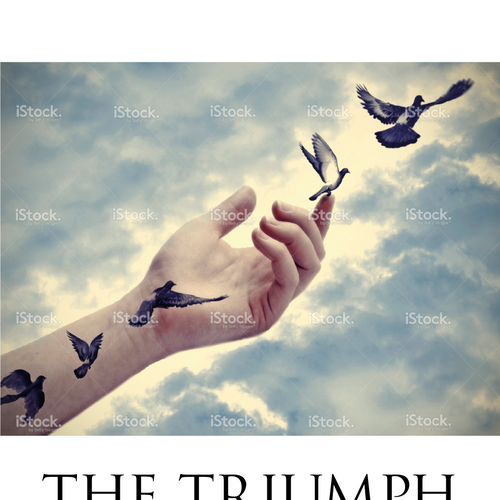 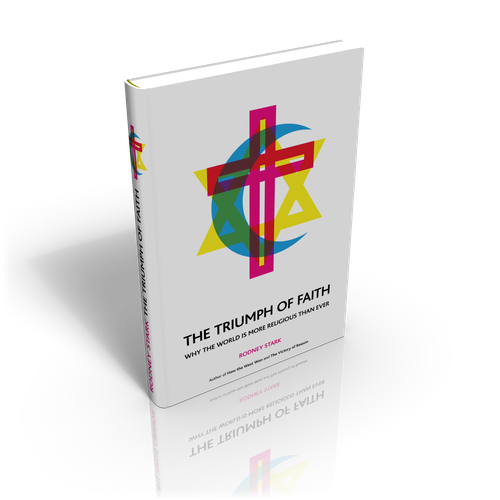 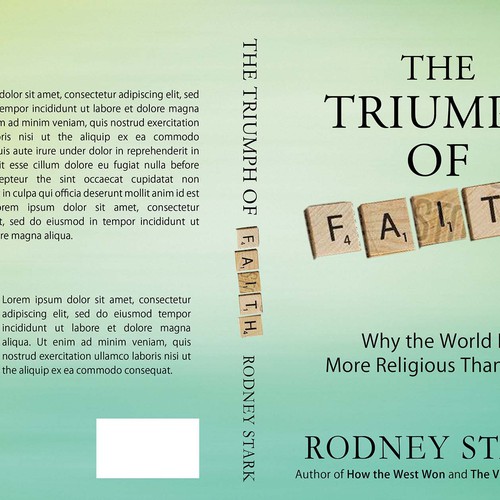 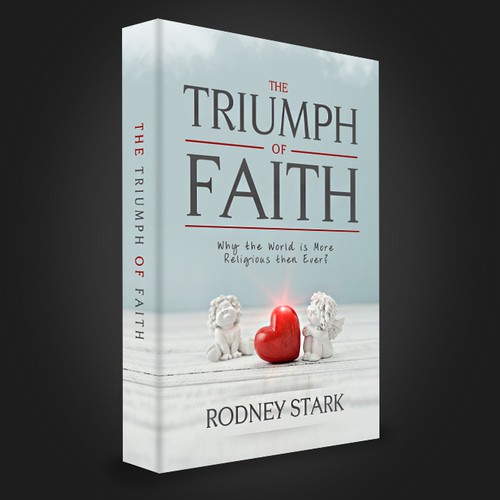 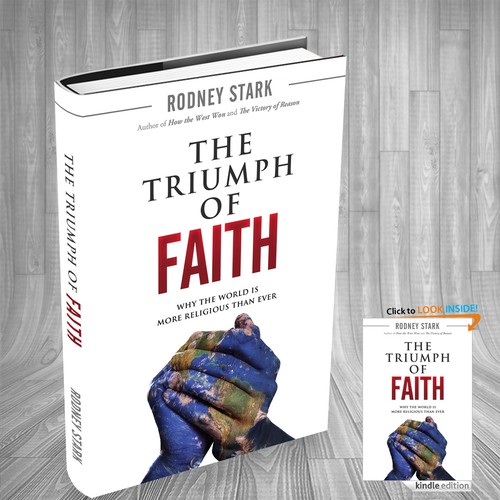 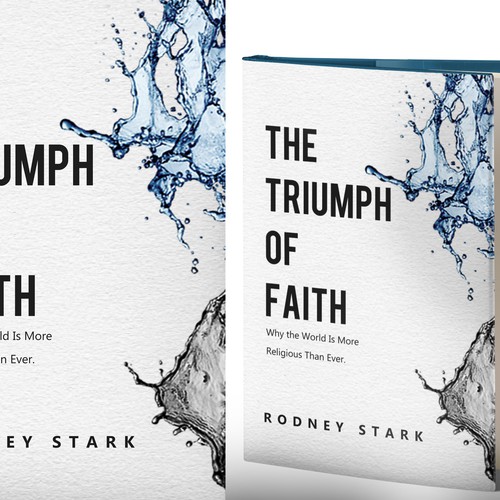 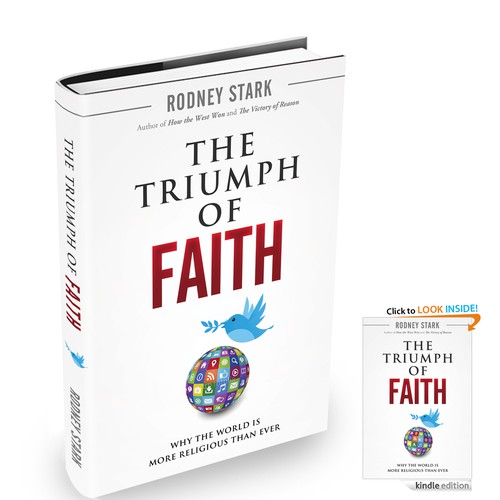 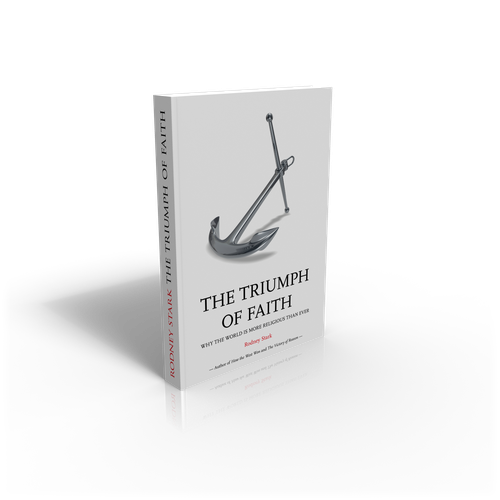 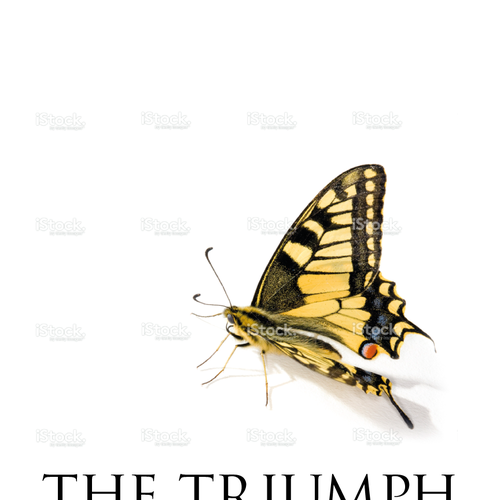 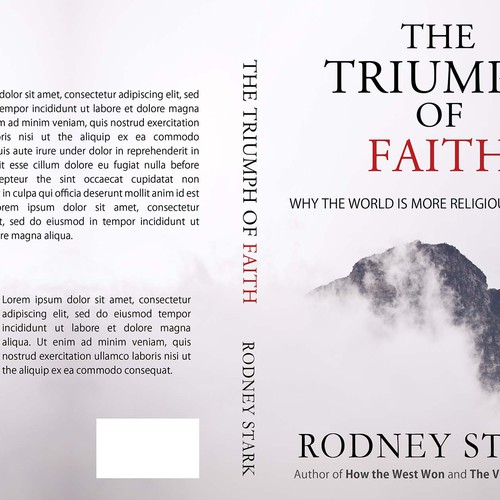 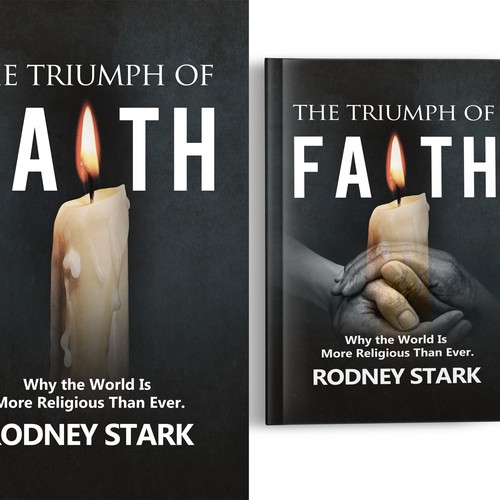 ISI Books is the publishing program of the Intercollegiate Studies Institute, a nonprofit, nonpartisan educational organization that teaches college students the principles and virtues that make America free and prosperous.

ISI Books is looking for a cover design for the latest book by bestselling author Rodney Stark. The book is *The Triumph of Faith: Why the World Is More Religious Than Ever.*

*Important note*: This is NOT a "religious" book. It is a current affairs nonfiction book by a bestselling author and scholar. In it, Rodney Stark debunks the widespread myth that people around the world are abandoning religion for secularism or even atheism. In fact, Stark demonstrates--using survey data from 163 nations--that the world has never been more religious.

That said, the target readership for this book is likely to be religious believers, who will welcome this message as good news. People of faith often feel increasingly under attack by a growing secular movement. So the cover should convey "The Triumph of Faith" as a positive development.

*Final cover files should be delivered in Adobe InDesign.*

TITLE: The Triumph of Faith

SUBTITLE: Why the World Is More Religious Than Ever

AUTHOR LINE (to go in smaller type below his name): Author of <i>How the West Won</i> and <i>The Victory of Reason</i>

CONCEPTS/IMAGERY:
It's best to start with what we DON'T want:

Again, this is NOT a religious book, so we DON'T want things like the rays of the sun breaking through clouds, a solitary figure standing on a beach or mountaintop, footprints in the sand, or anything else that might suggest a Christian bookstore offering.

We also DON'T want anything to suggest anything particularly American. As the subtitle says, this book covers religion all over the world.

As for what we DO want, we want this to look and feel like what it is: a serious but provocative and even news-making book about the world today. The book's central argument directly challenges something that many people (secularists and religious believers alike) take for granted: that the world is growing more and more secular. The book is serious and written by a respected scholar, but it is NOT a dry academic book. See comparable titles below.

We don't have specific images in mind. We could imagine effective covers that use photos or paintings prominently, and we could also envision taking a more iconographic approach.

We definitely want strong, readable type. The author name should also be given some prominence (see author's previous titles below for examples).

AUTHOR'S PREVIOUS TITLES (note that most of these are works of history; this new book is different):
http://www.amazon.com/Rodney-Stark/…APQGM6/ref

*Final files should be delivered in Adobe InDesign.*

Again, this is NOT a religious book. It's a current affairs book about the surprising growth of religion all around the world.

C'est parti!
Create a stop-in-your-tracks cover for the book LEARNING LOVE
$299
Resurrecting the Relational Christian Life
135
entries
30
designers
The War for Fundraising Talent - Front & Back Cover
US$ 499
Fundraising consulting Primary audience is non-profit organizations...
148
entries
38
diseñadores
Create a captivating book cover for a book dedicated to LGBTQ Youth
US$299
I am an inspiring writer and have written my first book. It is targeted towards LGBTQ youth.
61
entries
20
designers
Create a book cover for a celebrity motivational speaker & wounded combat veteran.
$ 518
-Title of Book: Vision -Tagline: Developing Strength and Success in the Face of Adversity
77
entries
24
Designer
Help me inspire the next generation of social workers
£ 339
I have been a social worker in the inner cities for the last 30+ years. I have written a book full of practical advi...
141
entries
22
designers
Create a unique cover design for the book "Never Miss A Beat"
$299
We are a school of music that specializes in developing and implementing music programs for the disabled and special ...
87
entries
22
designers
En savoir plus sur les designs de couverture de livre ou magazine
Voir comment ca marche