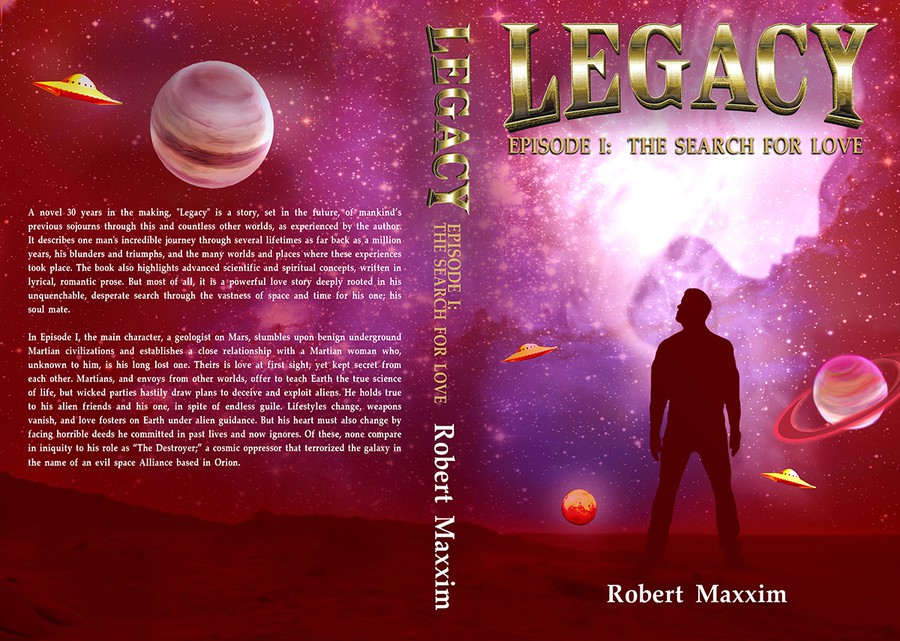 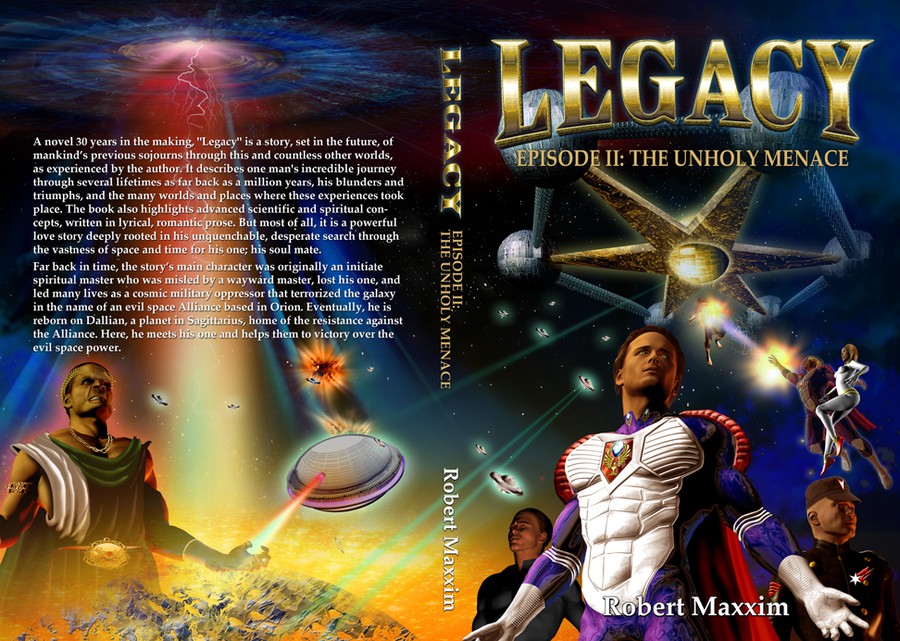 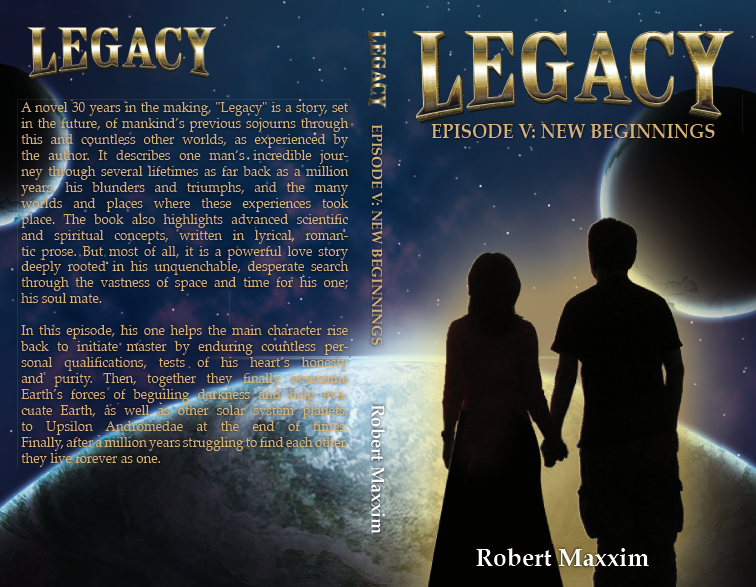 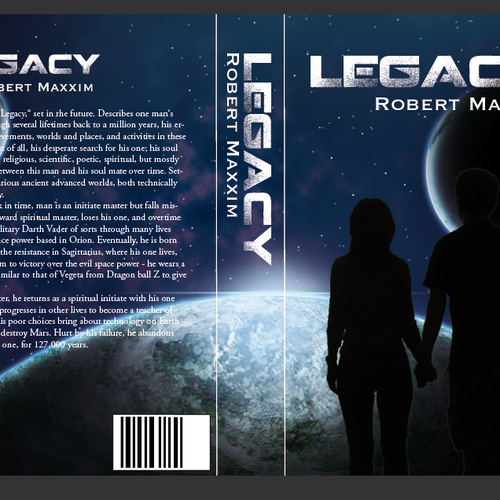 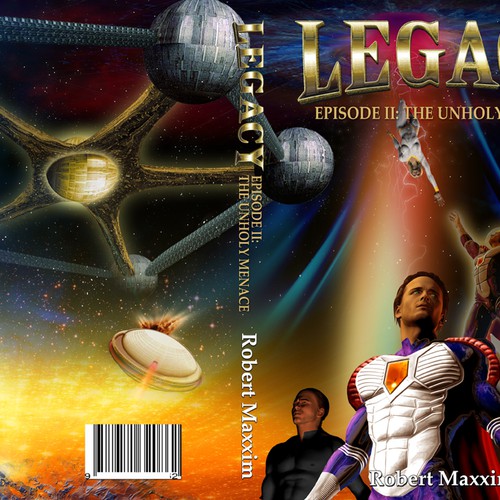 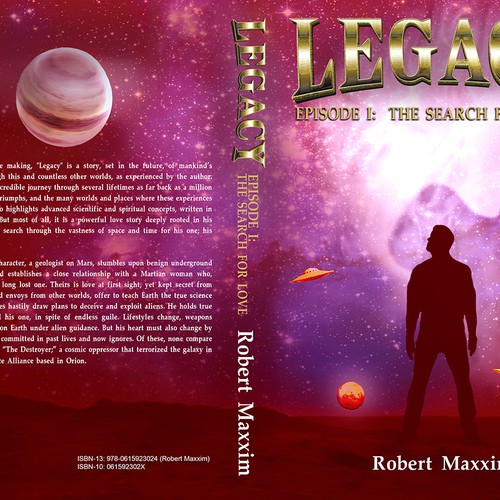 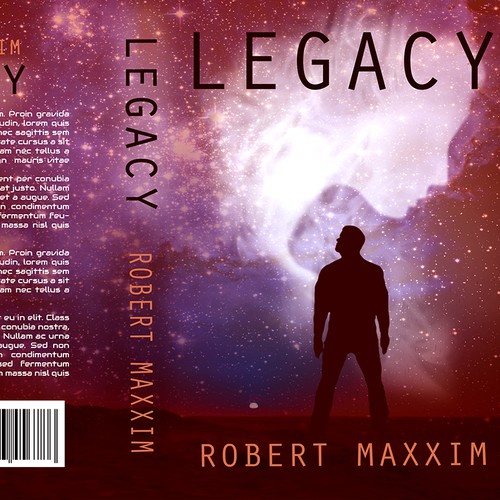 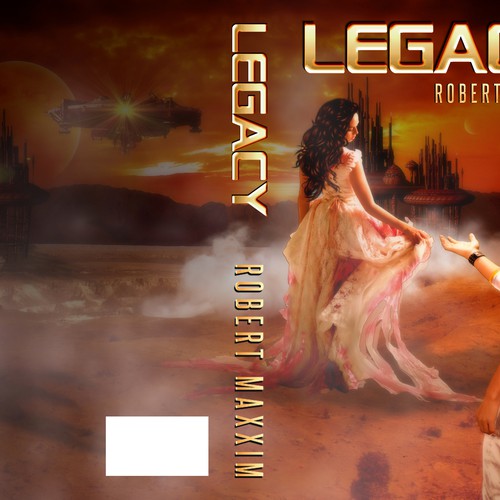 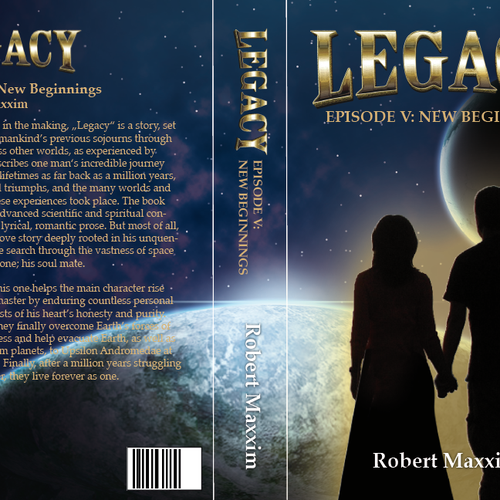 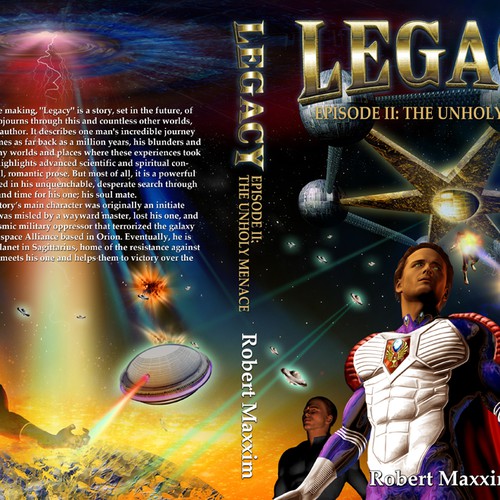 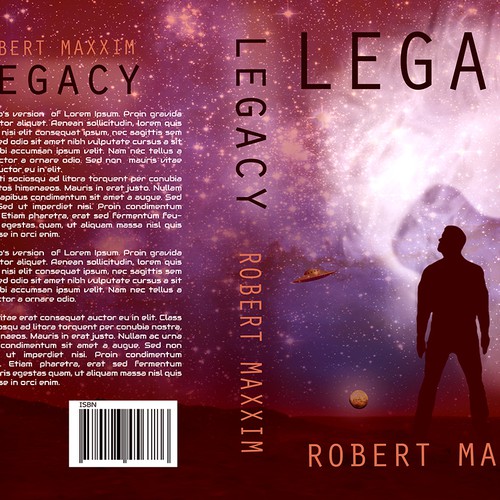 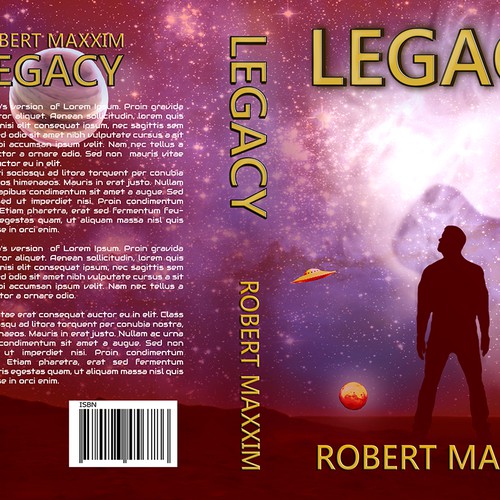 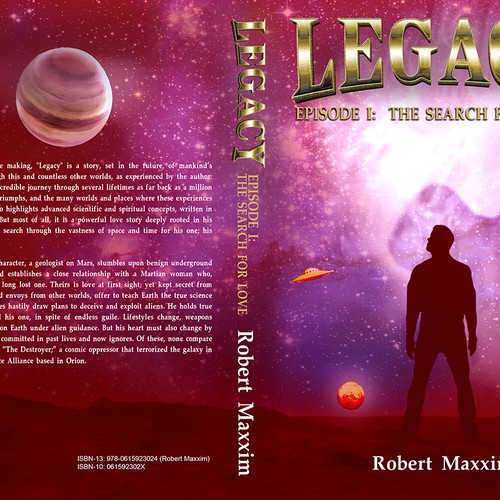 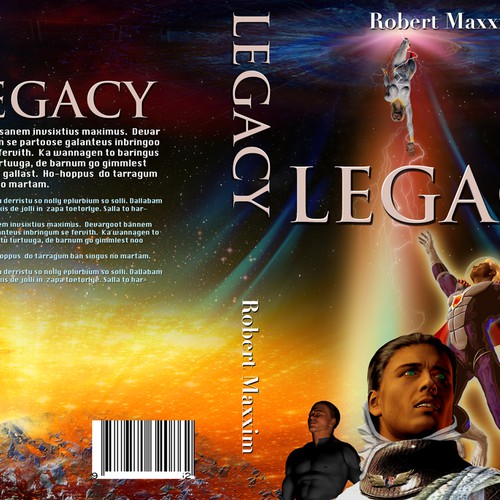 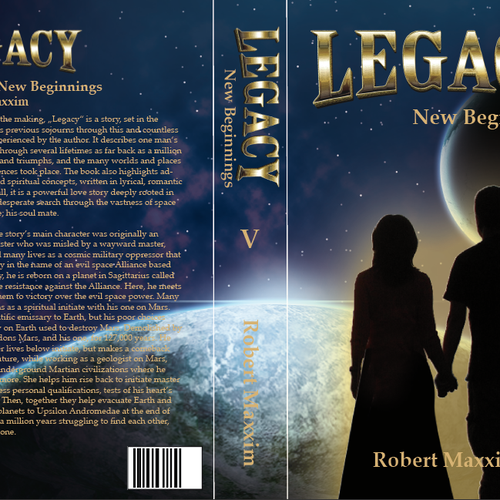 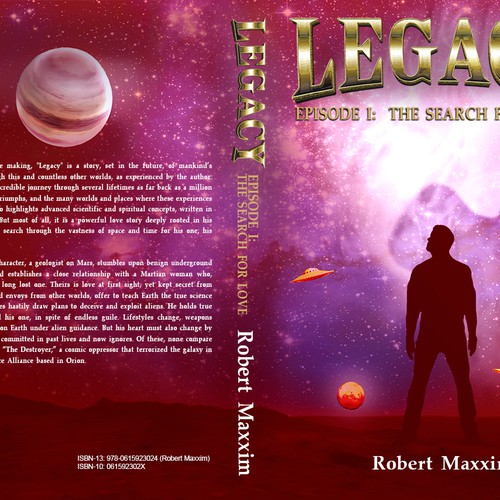 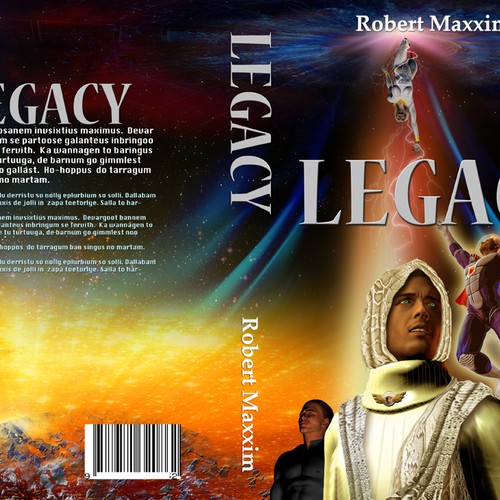 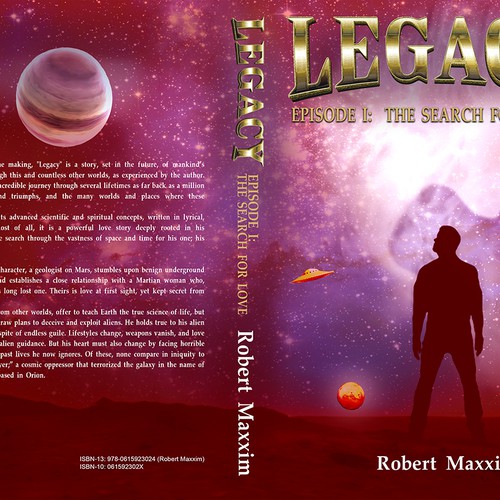 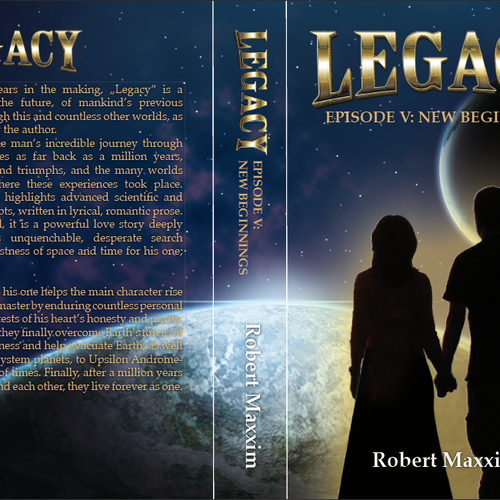 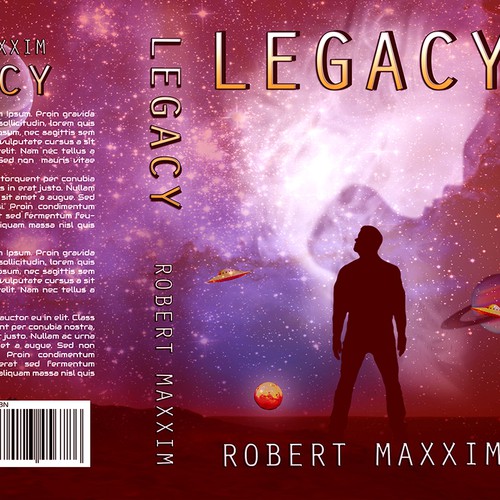 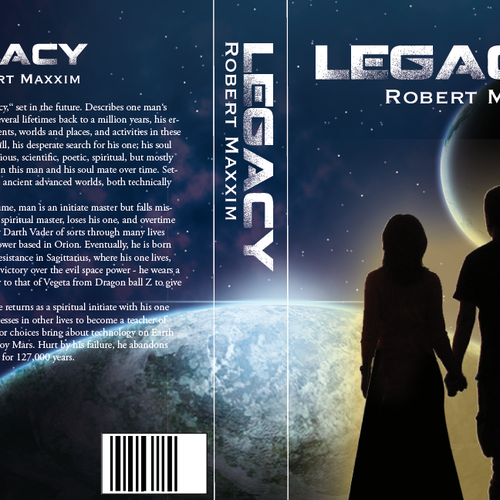 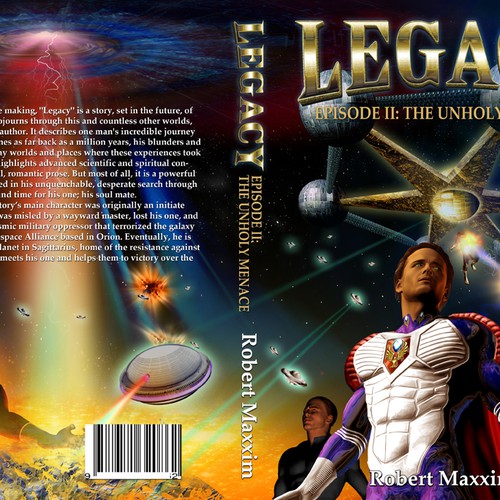 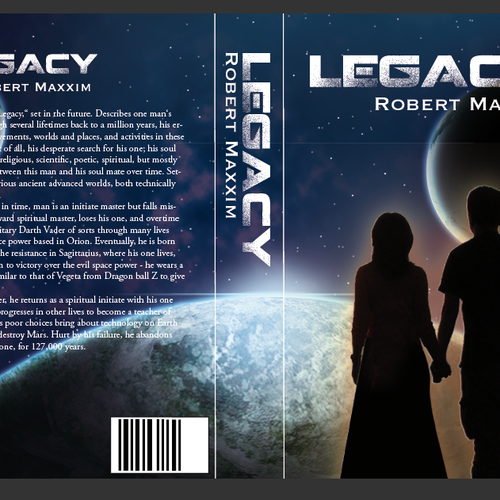 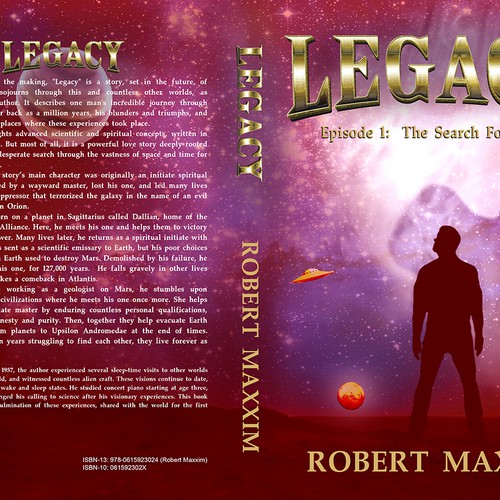 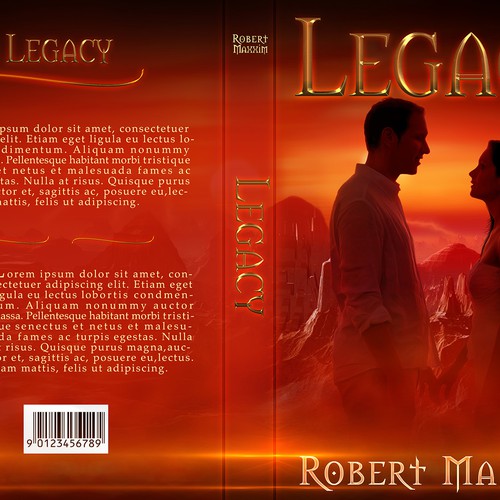 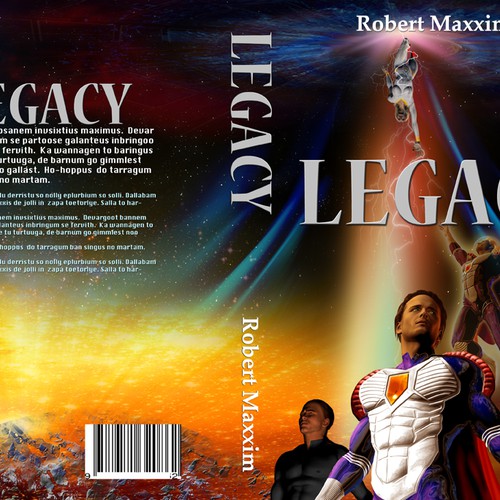 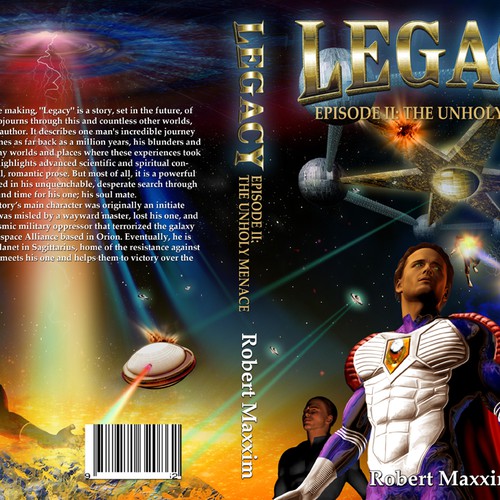 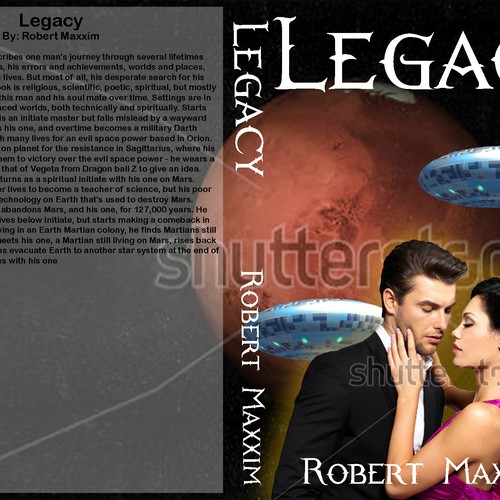 This is a science fiction book that I will publish soon, it will consist of three episodes

Book title is "Legacy," set in the future. Describes one man's journey through several lifetimes back to a million years, his errors and achievements, worlds and places, and activities in these lives. But most of all, his desperate search for his one; his soul mate. Book is religious, scientific, poetic, spiritual, but mostly a love story between this man and his soul mate over time. Settings are in various ancient advanced worlds, both technically and spiritually. Starts far back in time, man is an initiate master but falls mislead by a wayward spiritual master, loses his one, and overtime becomes a military Darth Vader of sorts through many lives for an evil space power based in Orion. Eventually, he is born on planet for the resistance in Sagittarius, where his one lives, and helps them to victory over the evil space power - he wears a warrior suit similar to that of Vegeta from Dragon ball Z to give an idea. Many lives later, he returns as a spiritual initiate with his one on Mars. He progresses in other lives to become a teacher of science, but his poor choices bring about technology on Earth that's used to destroy Mars. Hurt by his failure, he abandons Mars, and his one, for 127,000 years. He falls gravely in other lives below initiate, but starts making a comeback in Atlantis. In the end, living in an Earth Martian colony, he finds Martians still living underground, meets his one, a Martian still living on Mars, rises back to initiate master, helps evacuate Earth to another star system at the end of times, and forever lives with his one

I just uploaded some pictures of man, person, what might look like in each lifetime.  Book is heavy on space battles both around Sagittarius area first, then Mars.  Ships look like UFOs, not stuff you find in Star Wars.  Ideas for design might be picture, side by side, of each lifetime person, or picture of man and his soul mate gazing at each other with Mars as background?  Space battle?  I'll have four episodes, so, I think I'll come back for more designs.  First episode, first one I'm working on, is about encounter in the future with soul mate on Mars.  Second episode is memory recall of space battles in Sagittarius.  Third episode is memory recall of space battle on Mars.  Last episode is future, Earth is destroyed, inhabitants relocated to another star system, finally together with soul mate.  Send me comments, will love to work with you, no problem if it takes more than 7 days, I'm OK with that :)  Good luck, I'll probably end up with four winning pictures over time, one for each episode.

Create a Cover Design for Book on Making BIG Decisions
US$325
We publish best-selling books on entrepreneurship, personal development and self-help to readers around the globe...
169
entries
48
designers
Chiropractic Care for Clearer Vision Book Cover
$299
We provide natural solutions for people suffering from vision problems with the Bates' Method, Nutrition and Chiropra...
23
entries
7
designers
Create a fun ebook cover to encourage moms and daughters to love science
US$299
My platform is to encourage moms to bring a love of science to their daughters...
93
entries
24
designers
Book Cover - The Owner's Mindset
$799
This is a new book: Title: The Owner's Mindset Sub: How to Break Through to the Next Season Author: Vinni...
325
entries
87
designers
Searching for Award Winning Book Cover Design - "A Broken Piece that Fell from the Whatnot Shelf"
US$299
I am writing a book - my personal memoir....
42
entries
12
designers
Cover needed for a book: YOU AND YOUR GENDER IDENTITY: A GUIDE TO DISCOVERY
299 USD
Mental health counselor who works with the transgender/gender non-conforming population who is publishing a book
128
entries
24
designer

C'est parti!
Girls Guide to Wealth Book Cover
499 $
We offer online education and coaching to teach women how to flip houses and invest in real estate....
143
entries
35
Designer
Collegiate Aviation Review—International cover design (electronic publication)
US$ 299
The Collegiate Aviation Review—International (CaRi) is the refereed journal of the University Aviation Association (U...
39
entries
6
designers
Cover for an upcoming French bestseller - Fun work !
799 £
I'm the author of a book that will be published in French in September 2016. The book teaches the limitations of ...
96
entries
13
designers
Create a cover for my eBook about the 1994 Major League Baseball strike.
$299
Historical research and non-fiction writing...
102
entries
26
designers
Create a book cover for a book that will change lives. A Chance to make a difference
199 £
92
entries
26
Designer
Help design my book cover for Selah in the Storm
$299
I am an author who writes creative non-fiction (a true story told in a creative way). The target audiences for this p...
100
entries
14
designers
En savoir plus sur les designs de couverture de livre ou magazine
Voir comment ca marche