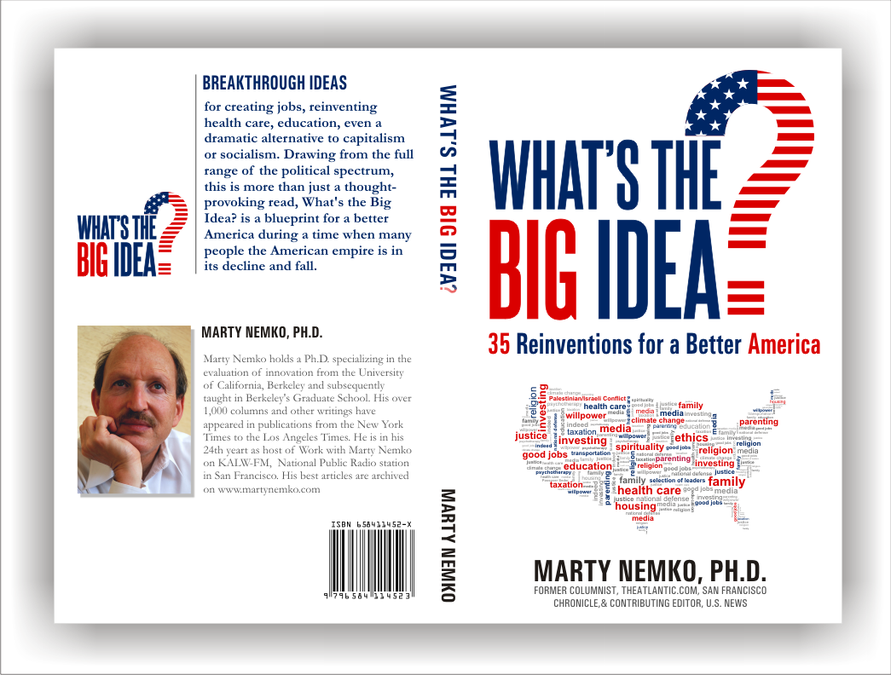 Cover for my book, "What's the Big Idea? 30 Reinventions for a Better America" 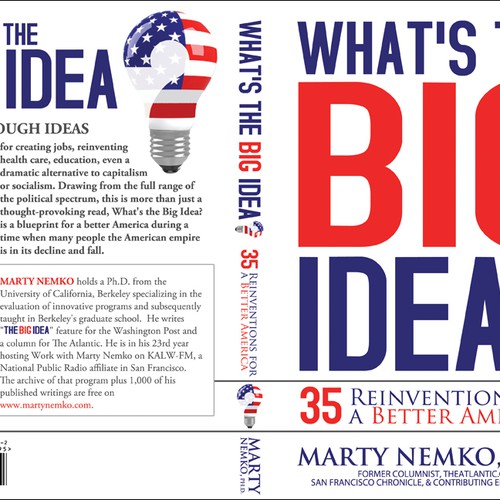 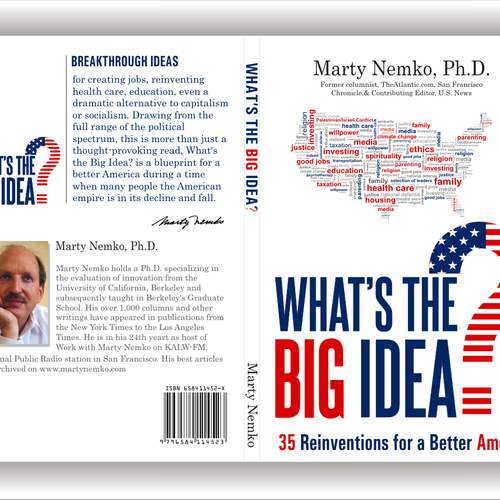 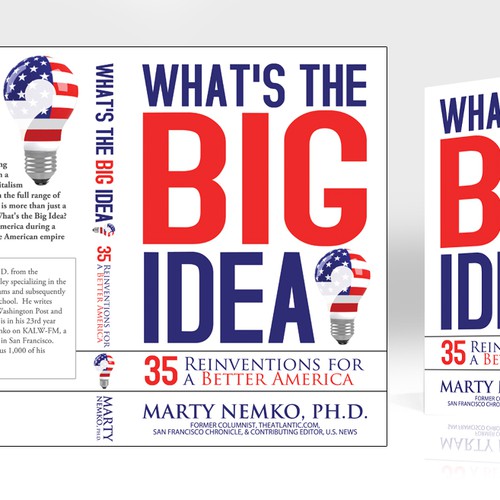 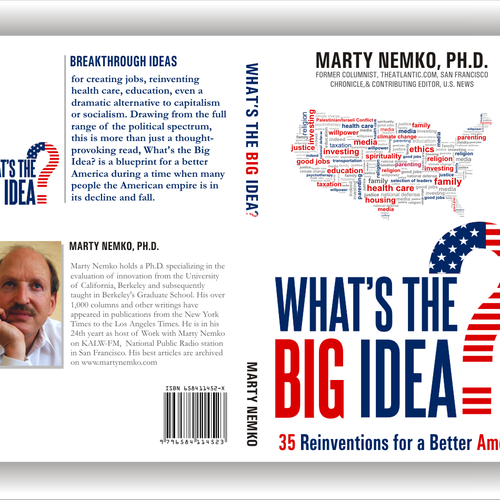 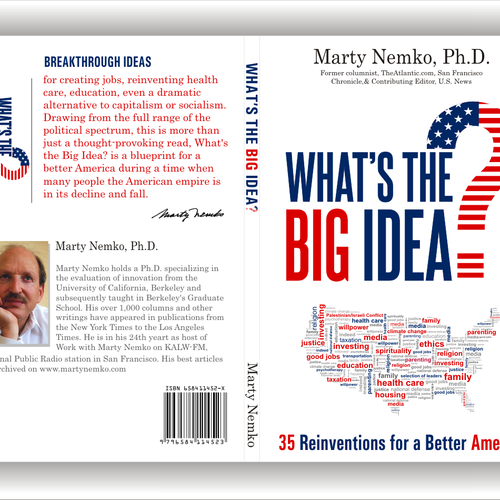 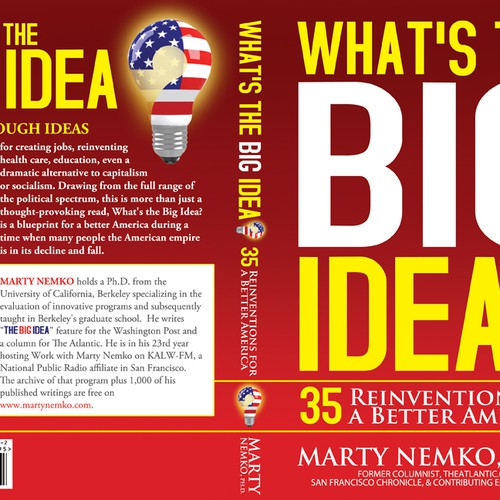 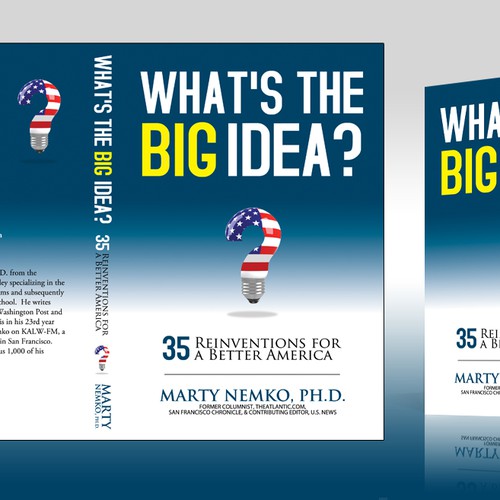 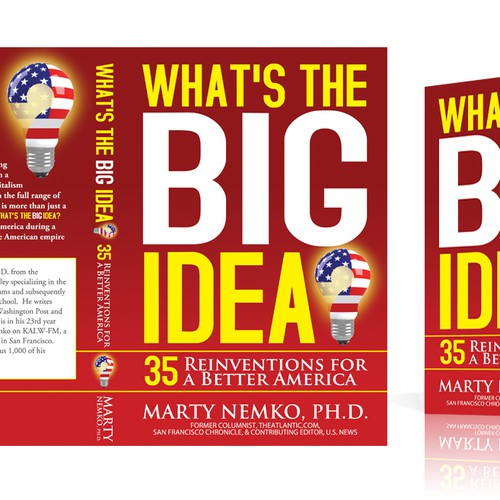 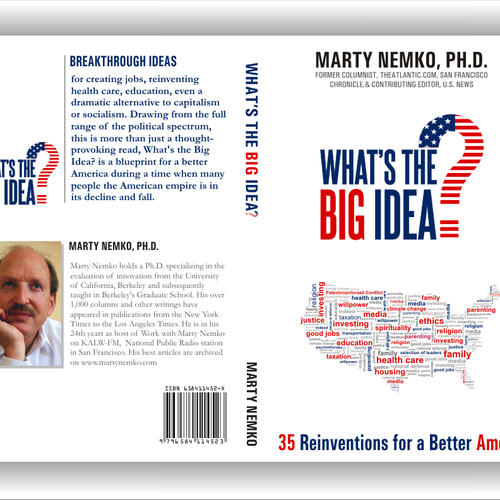 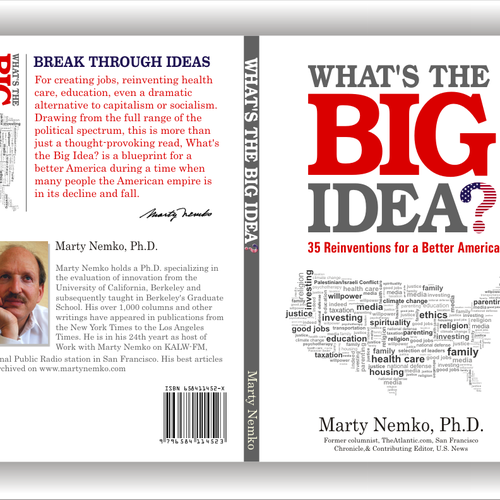 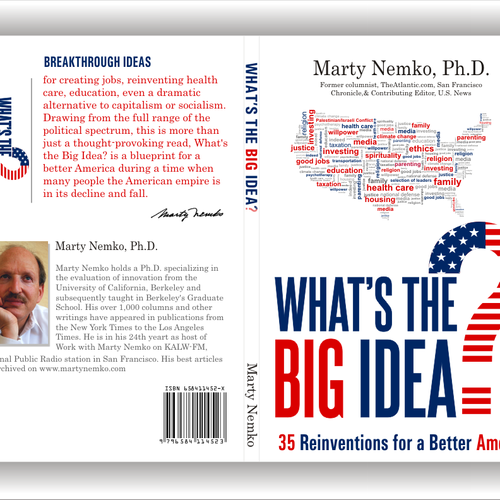 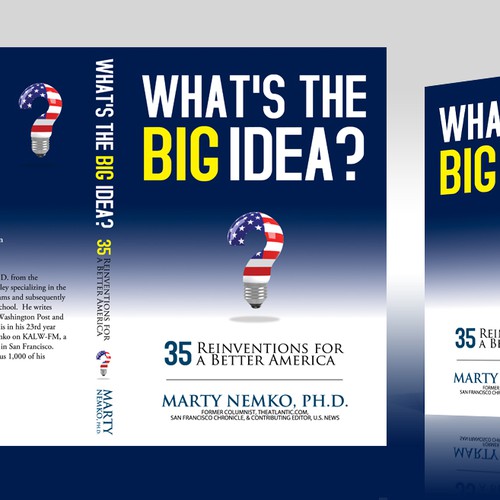 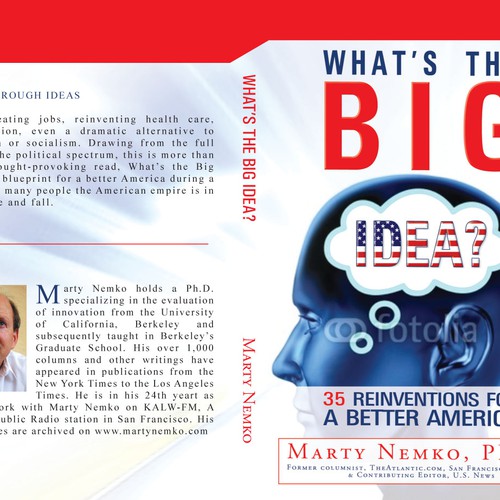 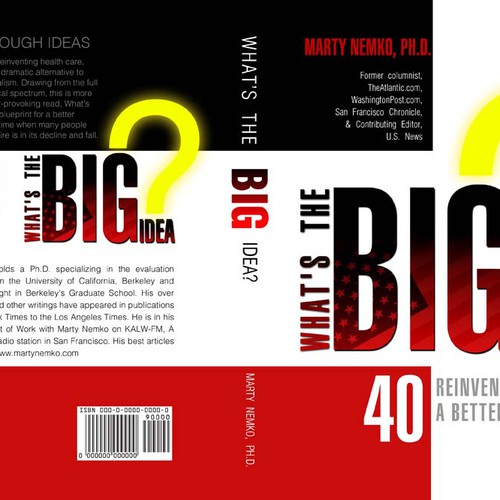 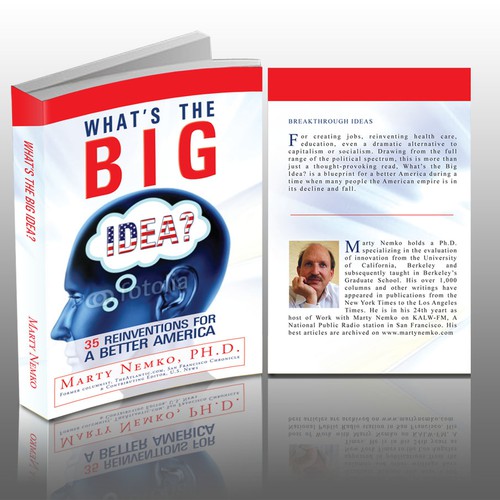 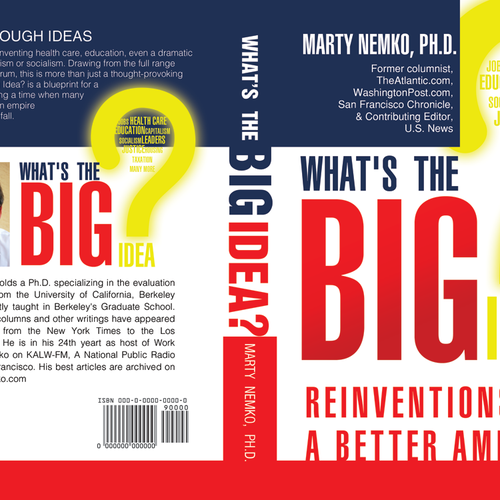 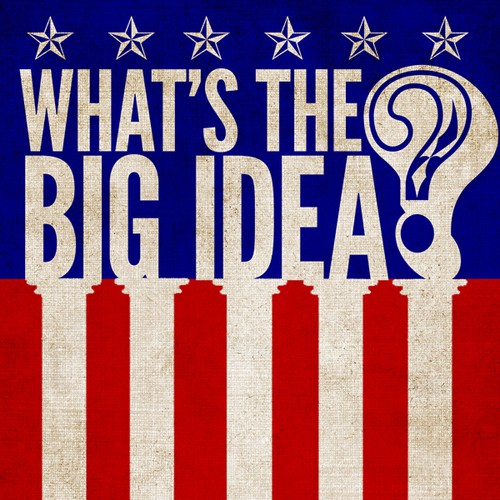 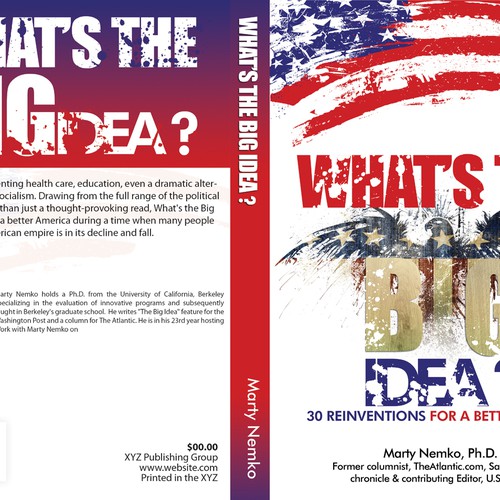 There is no organization. I'm the book's author

The target audience are people who are interested in public affairs, a better America, and a better world.

I need the cover for my book "What's the Big Idea: 40 Reinventions for a Better America."  The book consists of ideas for reinventing education, the way we select our leaders, our criminal justice system, housing, taxation, health care, indeed, many of society's most important components.

The file must consist of the front cover, spine, and back cover. The book will be 6 inches wide x 9 inches tall and will be published by CreateSpace. Here are CreateSpace's specifications for the cover: https://www.createspace.com/Special…lines.jsp. I'll also need a separate file that just contains the front cover.

For the front cover, I kind of like the image on page 2 of the attached file--it implies that society's pillars are getting reinvented, but that may be too difficult for people to understand. I am very open to your ideas.

The spine should say
What's the Big Idea? at the top of the book's spine, Marty Nemko at the bottom.

The back cover should say:
BREAKTHROUGH IDEAS
for creating jobs, reinventing health care, education, even a dramatic alternative to capitalism or socialism. Drawing from the full range of the political spectrum, this is more than just a thought-provoking read, What's the Big Idea? is a blueprint for a better America at a time when many people the American empire is in its decline and fall.

At the bottom of the page, it should say
Marty Nemko holds a Ph.D. specializing in the evaluation of innovation from the University of California, Berkeley and subsequently taught in Berkeley's Graduate School. His over 1,000 columns and other writings have appeared in publications from the New York Times to the Los Angeles Times. He is in his 24th year as host of Work with Marty Nemko on KALW-FM, A National Public Radio station in San Francisco. His best articles are archived on http://www.martynemko.com

new and unique book cover design needed for book titled "Get Hired by God"
299 US$
60
entries
17
designers
Create a book cover for "Mason Wilson And The Dead Bird Debacle"
299 CA$
The first in a series of quirky mystery-adventures for middle-graders.
156
entries
30
Designer
Great Opportunity to Work With Global Brand Designing First of THREE Book Covers
299 US$
We provide services to families with autistic children....
204
entries
36
designers
Design for my eBook, The Revolutionary Misfit Manifesto, a change-the-world type movement.
$299
It's a blog that aims to be a movement based on a concept I have dubbed impact mindfulness...
130
entries
33
diseñadores
Design an eBook cover for the first in a series of four women's self-help books
299 US$
LifeWithoutBaby.com is an international online community for women coming to terms with childlessness. The site offer...
124
entries
21
designers
Create a compelling design for The Hidden Power of Relentless Leadership
299 $
Ranked No. 1 in the nation for inpatient admissions by the American Hospital Association, and with over 17,000 empl...
52
entries
13
Designer

C'est parti!
Create a Provocative Book Cover for "War Was My Vacation"
300 US$
A Book for Men
42
entries
10
diseñadores
Book Cover Redesign
299 $US
A social enterprise that helps individuals and organizations help and assist those in need....
40
entries
14
designer graphistes
THE LUCKY ONE - book cover for true story about Sex Trafficking & Rescue
299 US$
As a survivor of human trafficking herself, author Jenni Jessen, knows firsthand the depths of trauma a body can endu...
73
entries
14
designers
Create a vibrant cover for the second volume of a science fiction trilogy
799 US$
Sci-Fi, digital art, event coordination and production, aimed at educating and exposing tyranny and injustice with sa...
27
entries
9
designers
Create the cover for an exciting book proposing a New Way forward in the LGBT/Religious Conservative Impasse
US$299
Written by authors reflecting this same diversity religiously and sexually
51
entries
12
diseñadores
Create a book cover for a celebrity motivational speaker & wounded combat veteran.
518 $US
-Title of Book: Vision -Tagline: Developing Strength and Success in the Face of Adversity
77
entries
24
designer graphistes
En savoir plus sur les designs de couverture de livre ou magazine
Voir comment ca marche