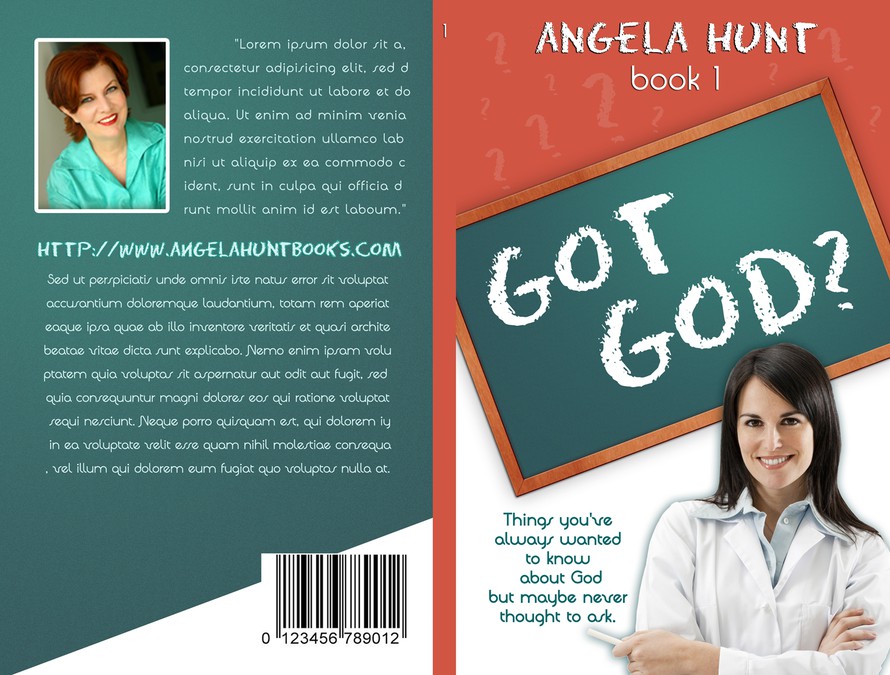 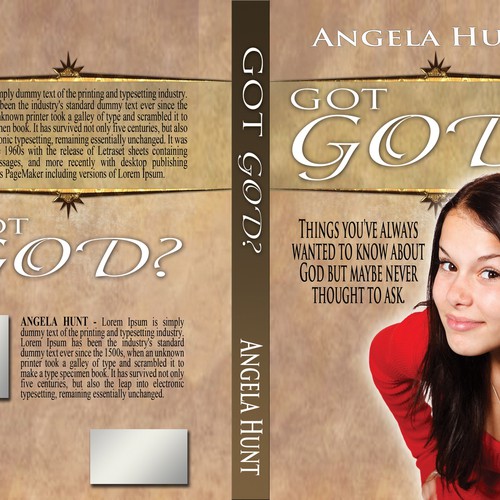 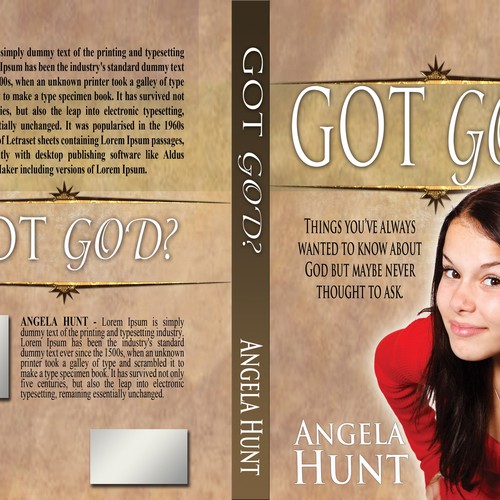 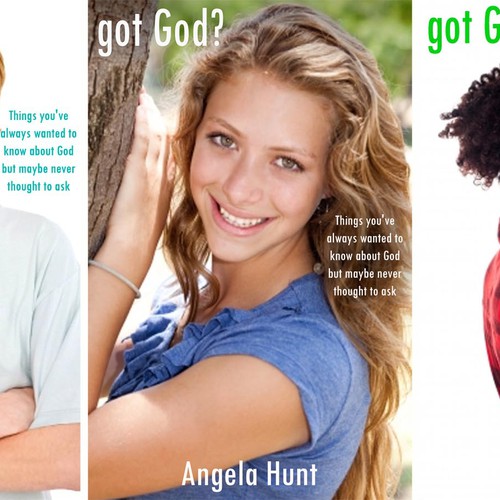 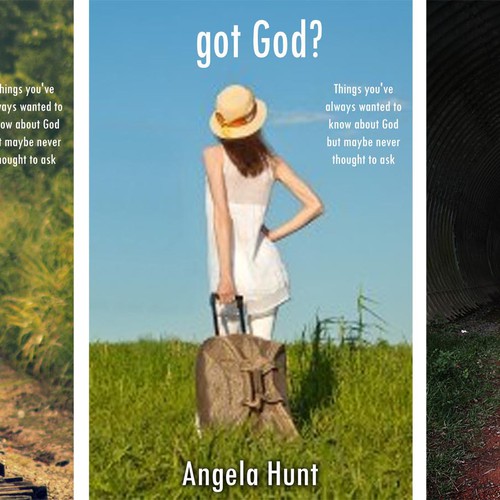 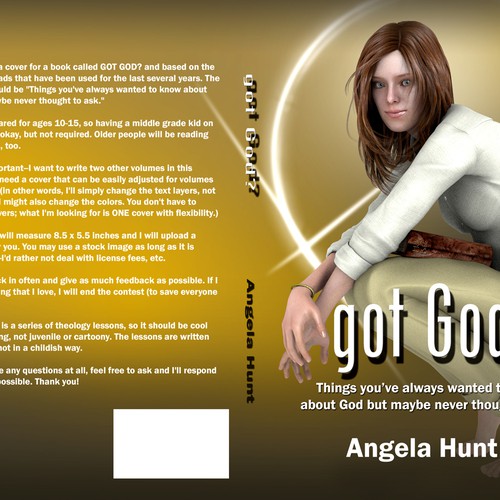 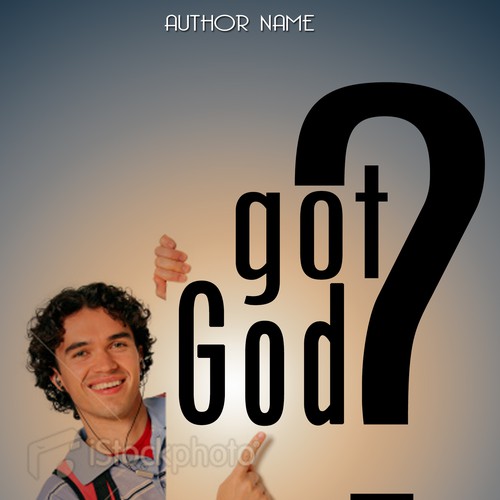 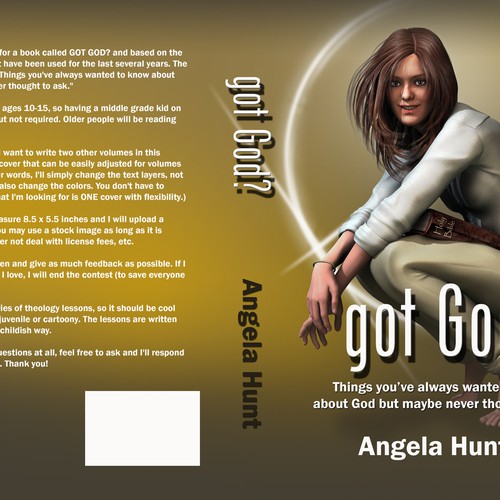 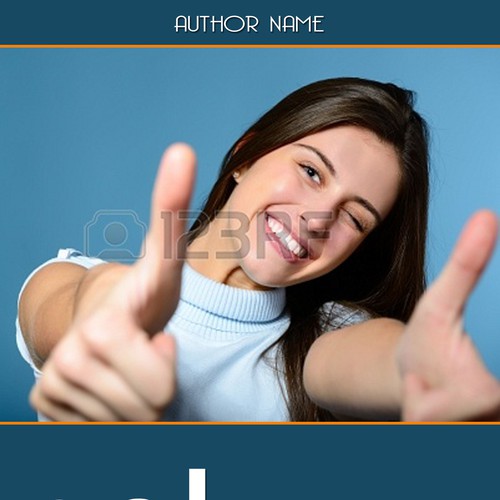 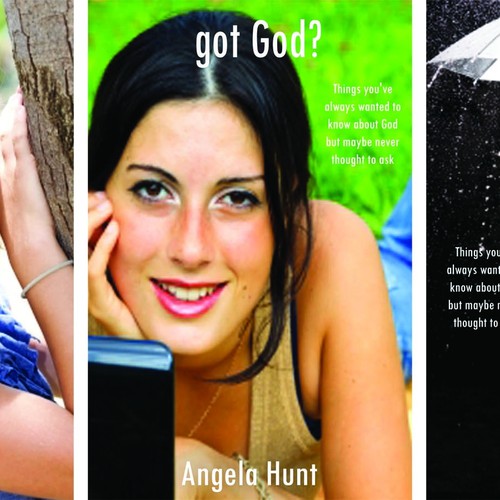 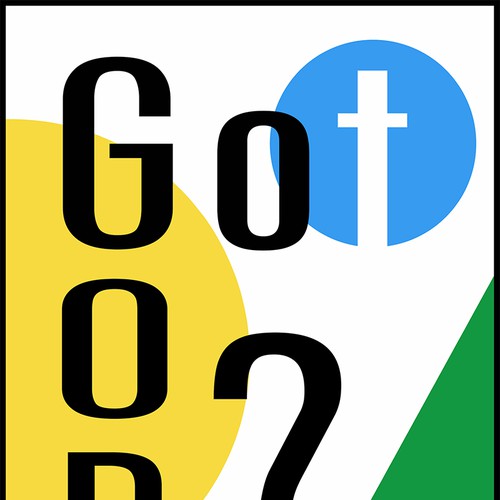 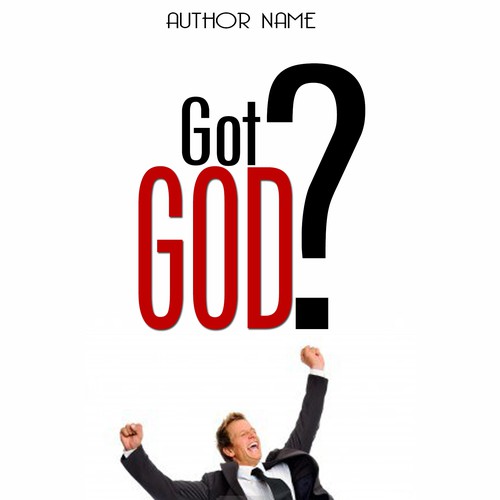 We publish books in print and digital editions.

We need a cover for a book called GOT GOD? and based on the GOT MILK? ads that have been used for the last several years. The subtitle should be "Things you've always wanted to know about God but maybe never thought to ask."

This is geared for ages 10-15, so having a middle grade kid on the cover is okay, but not required. Older people will be reading these books, too.

Most important--I want to write two other volumes in this series, so a need a cover that can be easily adjusted for volumes 2 and three (in other words, I'll simply change the text layers, not the design. I might also change the colors. You don't have to design 3 covers; what I'm looking for is ONE cover with flexibility.)

The book will measure 8.5 x 5.5 inches and I will upload a template for you. You may use a stock image as long as it is royalty-free--I'd rather not deal with license fees, etc.

I will check in often and give as much feedback as possible. If I see something that I love, I will end the contest (to save everyone else work).

This book is a series of theology lessons, so it should be cool and appealing, not juvenile or cartoony. The lessons are written simply, but not in a childish way.

If you have any questions at all, feel free to ask and I'll respond as soon as possible. Thank you!

Update!;   visit http://www.vintageadbrowser.com/got-milk-ads   and look at this vintage "got milk?" ads. If there's a picture on the cover, I don't think it should look like a perplexed or confused person, but rather someone successful and confident--yes, they have all that, but have they "got god?"   I realize the title and author name will have to be much larger than in the original ads, and we certainly don't want a photo of someone as old as Joan Rivers (no offense to her intended  ;-) )  but it should be an image of someone cool, popular, attractive, who seems to have their act together.

I hope these latest thoughts are helpful.

I've launched a poll, and though the reactions to various covers are predictably mixed, here's one thing I've figured out--the adults won't pick up a book with teens on it, and vice versa.  And there's some pretty heavy stuff in here, though it's simply explained, and I'm thinking maybe some adults would want to read it.

So instead of photos of kids/teens, maybe the image should be of a professor type, maybe a guy in a cap and gown looking out at the reader?  Maybe even some kind of humorous expression, like he's asking the question, "Got God?"

I apologize for sounding like I'm changing my mind, but I'm learning things from the poll and I want this to be the best it can be.  Thank you!

(I've even helped by uploading some istockphoto shots that I think would work!)

Business Goes to the Movies Book
$299
Help thought leaders write books that make a difference in the world. This is a make-a-difference book for one of my ...
80
entries
20
designers
Create a fun ebook cover to encourage moms and daughters to love science
$299
My platform is to encourage moms to bring a love of science to their daughters...
93
entries
24
designers
Book cover- framework for educators on re-designing school for today's Anytime Anywhere Learners
CA$ 499
The goal of the Anytime Anywhere Learning Foundation (AALF) is to ensure that all children have access to unlimited o...
212
entries
27
designers
Create an Awesome Book Cover for a Nonfiction How-to Writing Book
$ 299
publish books and e-books for general audience...
250
entries
16
Designer
Create a captivating book cover for 'Breaking Normal'
$ 299
A radical upgrade to communication & connection
216
entries
28
Designer
Book cover for real life drama of a Businessman "Broken" by false beliefs but ultimately restored
US$499
“Broken; How Being Broken Unlocked The Greatest Success of My Life”, is to teach men, in a position of leadership, to...
157
entries
35
designers

C'est parti!
Design a book cover for a book called Mindset: Cracking the code
A$339
We change the way people think so that they can lead a happier more congruent life. We do this through Mindset Profes...
200
entries
29
designers
Book Cover for "For Giving Love" a Book About Forgiveness and Love
325 US$
Publish inspiring business, personal development and healthy lifestyles books...
134
entries
38
diseñadores
Create book cover for an entrepreneur book - to students!
$299
About me: My name is Rasmus Madsen and since I played with LEGO, I have dreamed about becoming a serial entrepreneu...
128
entries
30
デザイナー数
Collegiate Aviation Review—International cover design (electronic publication)
US$299
The Collegiate Aviation Review—International (CaRi) is the refereed journal of the University Aviation Association (U...
39
entries
6
designers
Create a teen friendly book cover that will empower them take charge of their life!
US$299
I travel across the country as a youth motivational speaker, focusing on resilience, grit & perseverance. My target a...
143
entries
7
designers
Funky/positive/relaxed E-BOOK Cover for Polish Easy Readers series
£199
Positive and funny design helping to convey the message "POLISH is EASY"
92
entries
12
designers
En savoir plus sur les designs de couverture de livre ou magazine
Voir comment ca marche